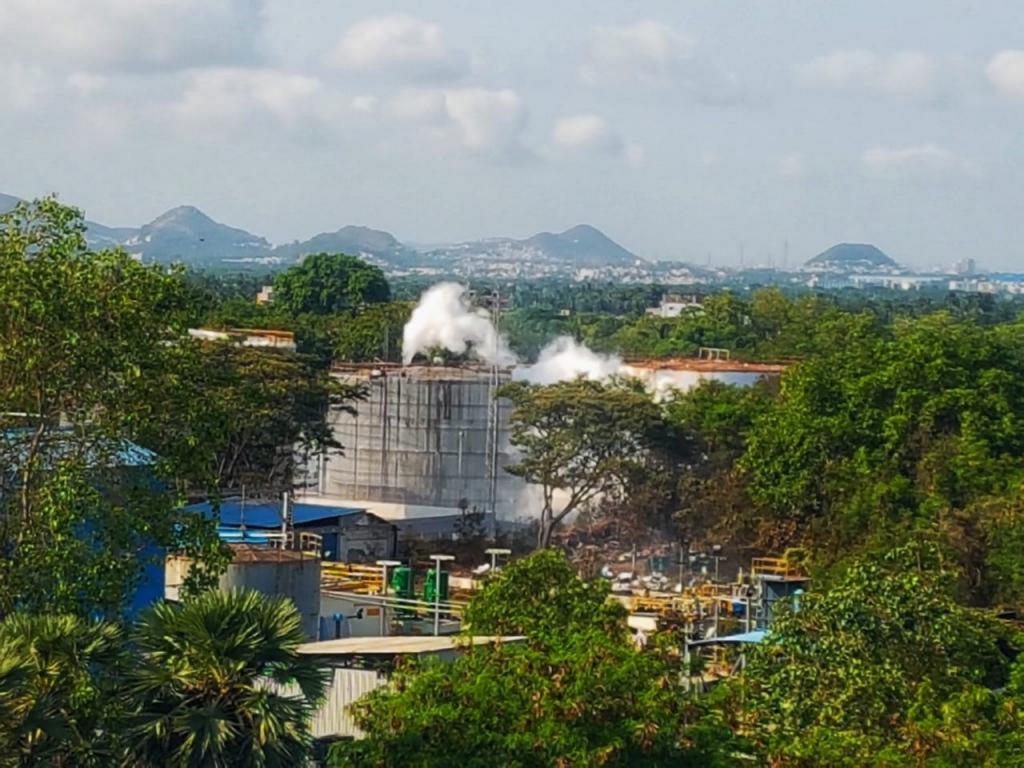 This is the second part in a two-part series.

The styrene gas leak resulted in impacts on the health of the people who lived in five villages near the plant and posed a risk to the flora and fauna as well, the government report said.

It also resulted in the drying up of trees in the vicinity of the tank from where the gas leaked, said The High-Power Committee on The Styrene Vapour Release Accident at M/s LG Polymers India Pvt Ltd report, prepared by a high-level committee.

The report — submitted July 6 — revealed several safety lapses and gross negligence in the handling of the gas leak and included immediate action taken by government agencies and departments and the committee’s suggestions and recommendations.

The death of 12 people and injury of 585 was highlighted by the report, citing an official statement by the district administration.

Several people were found unconscious, semi-conscious and suffering from other health issues, including nausea, breathing difficulties, skin rashes, sore eyes, etc. Rescue and evacuation operations carried out by the police with the assistance of locals helped evacuate 600 people, with the victims shifted to nearby hospitals immediately, the report said.

Overall, 20,000 people from 17,000 homes in the affected villages were evacuated, with arrangements made at 23 rehabilitation centres.

Additionally, aspects such as the local flora and fauna, natural environment like water bodies, air sheds, soil, farms, vegetation and livestock were also assessed. Each was found to have certain short- and long-term impacts.

The state’s animal husbandry department reported the death of 34 animals.

All the trees in the vicinity of the M6 tank, where the gas leak occurred, were either fully or partially dry. This was ascertained by a joint team of the Council of Scientific and Industrial Research-National Environmental Engineering Research Institute (NEERI) and the Chemical, Biological, Radiological and Nuclear (CBRN) team of National Disaster Response Force (NDRF).

Plants dried up wherever the relatively heavy mixture of monomer and polymer styrene was flooded, the team noted. All the trees were dried up to the level of styrene vapour engulfing the affected area.

The state horticulture department reported damage to half the crops within a five-kilometre radius from the site of the accident.

For crops that were not affected, the horticulture department advised farmers to destroy them instead of selling them as produce, as they were not safe for consumption.

The drinking water supply was also disrupted because of the possibility of contamination. The Greater Visakhapatnam Municipal Corporation (GVMC) took immediate remedial measures to sanitise 6,318 houses in the affected areas, including disinfection and sanitization in the main distribution main lines and reservoirs.

Mobile water tankers were then made available to the people of the affected villages.

The report also highlighted aspects that may be considered long-term impacts from the gas leak. These included the effects on future health, livestock and on elements of the biota like air, water, soil, flora and fauna.

In most cases, long-term impacts are not a very serious concern. It is, however, still prudent to ensure these aspects are continuously monitored for any anomalies or abnormalities in the future because the accident was rare, the report pointed out.

Long-term effects of styrene vapour must be done by constituting appropriate institutional monitoring mechanisms for at least two years, according to the report. This must be carried out with a particular focus on the health of pregnant women, the newborn, the residents of affected villages and the fodder, feedstock and milk of cattle, etc.

The report also called for individual government departments, including medical and health, veterinary, horticulture, forest and environment, to be made responsible for the studies.

The committee also highlighted the duties that agencies and organisations have during such a state of emergency.

These include rescue and relief, monitoring the environment, human health, commercial facilities, providing temporary accommodation to the people living in and around the affected areas, inspection of the LG Polymers industry, filing complaints, etc.

Specific roles and responsibilities of the departments need to undertaken as well. The specific roles performed were found to be more or less in line with stated protocol, except for the state government’s department of factories and the Andhra Pradesh Pollution Control Board (APPCB).

This is evident from the fact that three government officials, including two APPCB officials and the deputy chief inspector of factories were suspended.

The APPCB officials reportedly allowed continuance of operations and the expansion of LG Polymers without an environment clearance, the import and storage of styrene without verifying safety and environmental issues and without real-time continuous styrene gas monitors.

The deputy chief inspector was suspended for dereliction of duties and other irregularities.

The sections in this chapter detail aspects related to factory safety regulatory gaps and distinctive features of safety laws.

It further gave suggestions and recommendations on changes that can be made to streamline existing process or mechanism even further, discussing new processes that can be carried out by the factory safety board and state pollution control boards (SPCBs).

These include processes during the establishing of a factory / industry, its operation (at the time of starting and every year thereafter) and addressing manpower issues related to factory safety boards.

An important facet mentioned as a recommendation was that ‘environment’ be included in the Concurrent List of the Constitution of India, something that can empower states to enact laws according to their requirements. This can be done, considering local conditions, pollution problems and other relevant environmental and other issues.

This aspect was included in the report keeping in mind the preamble to the Water Act, 1974, the Air Act, 1981 and the Environmental Protection Act, 1986.

This can allow central legislation to provide for the minimum environmental standards in the country, while allowing states a higher degree of control to exercise the same through strong legislation, especially in highly polluted areas, the report said.

Poor working conditions and compliance of Indian industries, especially chemical industries, were also highlighted by the report, including several lapses at the LG Polymers plant.

These lapses can be grouped either under the internal working of the industry staff or failure of regulatory agencies to ensure compliance of industrial operations, safety and environmental norms.

The report also pointed out several challenges that lie ahead for governments. Prominent regulatory gaps in the current practices of monitoring and compliance of safety laws and parameters in the factories in the report are something that have been known to the agencies.

No action, however, was ever taken to rectify them.

The detailed to-the-point suggestions and recommendations addressed concerns related to existing regulatory gaps in the monitoring and compliance of the environmental acts and regulations.

Factory safety regulations, other safety laws, environmental regulations, etc, are of huge significance. The aim was to streamline current processes, while empowering the state to regulate its own industries and manage its pollution problems autonomously, the report said.

One of the most significant developments pointed out was the penal action taken, not just on the organisation and agencies, but on individuals considered to be responsible directly or indirectly.

This is something that rarely occurred in the past, as a result of industrial non-compliance, primarily due to the limitation of the SPCBs’ powers which do not include any penal action and the National Green Tribunal, that can undertake civil litigation only.

The accused were arrested under Sections 278, 284, 285, 337, and 338 of the Indian Penal Code. All those who were arrested will be produced in court for judicial remand.