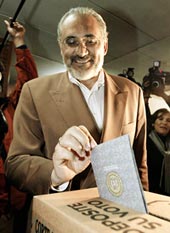 A nation characterised by military coups has chosen the ballot over the the bullet in a bid to settle a crucial national issue. On July 18, Bolivian president Snchez de Lozada's successor, Carlos Mesa, convened and won a five-point referendum deciding the fate of the country's oil and gas reserves. Bolivia has certified gas reserves of 52.3 trillion cubic feet, second only to Venezuela in the continent and almost as much as Kuwait. It is also South America's poorest nation.

Natural gas exploitation and export is an explosive issue in Bolivia. So much so that public anger at proposals to ship the gas out of Chilean ports toppled the Gonzalo Snchez de Lozada government in October, 2003. When Bolivia opened its gas sector to foreign investors in 1996, us energy giant Enron helped build a pipeline to Brazil. Vintage Petroleum, a Tulsa, Oklahoma-based producer of natural gas, invested millions. So did multinational energy giants. But average Bolivians started to question why private companies and not the treasury would benefit from these gas exports. Under the 1996 law, gas underground belongs to the state but becomes private property at the wellhead.

In the referendum, Bolivians came out in support of Mesa's plan to repeal the 1996 law. This is tantamount to expropriation since it declares government ownership of what the 1996 law deemed private property. Energy companies and the us want to see how far Mesa will retreat from free-market policies when he sends a proposed energy law to congress in August.