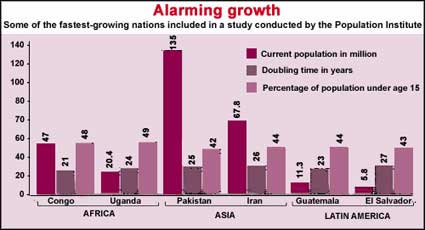 Seventy-four developing countries, where the population of those under 15 years is one-third of the total will double their population within 30 years or less. This is in spite of death rates having gone up and fertility rates having decreased in many Third World countries. According to the United Nations, 53 developing countries will be unable to meet their food needs in the next three decades. Interestingly, only 20 per cent of the Earth's human population lives in developed countries and that will drop to 16 per cent by the year 2020.