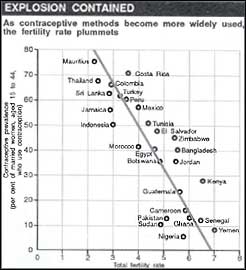 • In the developing countries, 51 per cent of the women practice family planning -- a total of over 500 million women, compared to 70 per cent in the industrialised countries.

• 80 per cent of married women in the developing countries today contraceptive methods. Sterilization is the most common method of family planning and intra-uterine devices comes next.

• More than 120 million women in the developing countries lack access to any form of contraception (1 women in every 5). If this demand were met, the fertility rates would fall to about 3 children per woman. Bringing family planning programmes to this population would cost an estimated US $2.4 billion.

• Birth control methods have the greatest direct influence on fertility rates. Better educated women are more likely to practice some form of contraception than are women with little or no education at all.

• But world population continues to rise inexorably: the number of people is expected to double to 10 billion by 2050. The bulk of the increase (97 per cent) will take place in the developing countries where 1/3rd of the population is younger than 15 years.