Prize for tiller, loss for industry 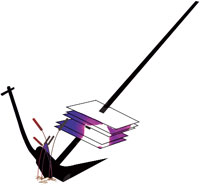 THE STATE should never acquire land for ventures that involve any element of profit. This is one of the radical recommendations made by a parliamentary panel in its report on the Land Acquisition, Rehabilitation and Resettlement Bill of 2011.

Submitted on May 17 by the Parliamentary Standing Committee for Rural Development, the report proposes complete overhaul of provisions in the Bill (see table).

Taking on the most controversial clause of the Bill, the committee disagrees with government’s claim that acquiring land for private enterprises and under public private partnership would establish a “public purpose”. The committee, headed by BJP MP Sumitra Mahajan, says interpretation of the phrase “public purpose” should be limited to linear infrastructure (like roads) and irrigation, including multipurpose dams, and social sector infrastructure, like schools and hospitals constructed at state expense. Land is a state subject and acquisition falls under the concurrent list, therefore, all social sector and infrastructure projects should be routed through state governments, the committee says. It also wants all acquisition to be done in close consultation with gram sabhas and panchayats. The committee recommendations prohibit conversion of agricultural land to industrial. It says provisions on “irrigated multi-cropped land” be replaced by “any land under agriculture cultivation” to ensure safeguard for food security. 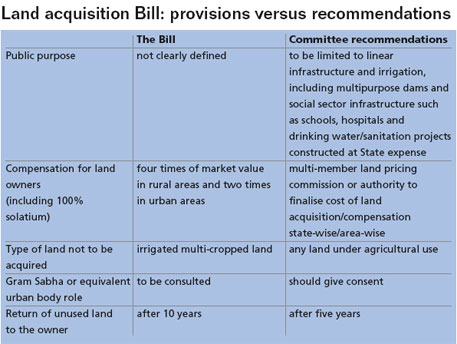 The bill proposes that compensation should be four times the market value of the land proposed to be acquired in rural areas and two times in urban areas. As per the committee, a multi-member land pricing commission or authority should be commissioned to finalise the cost of land acquisition or compensation state-wise or area-wise.

Rural development minister Jairam Ramesh, along with industry and activists, has criticised some of the committee’s recommendations. In a press conference, Ramesh said, “Government role can be confined to public purpose—a role at times met by private industry like those providing airports and power plants. The notion that private companies only make profits is not one I believe in.” Confederation of Indian Industry (CII) president Adi Godrej says the recommendations will affect industry. “The bill has rightly included industry in the definition of ‘public purpose’ as industry equally contributes to creating wealth and employment for the country.” But the committee did not consider the needs of the industry. The recommendations “will make the land acquisition more complex and difficult”, he says, adding the 12th Five Year Plan proposed US $500 billion private investment in infrastructure.

According to National Alliance of People’s Movements (NAPM), the report makes some positive recommendations but falls short of fulfilling the overall aspirations of people. Madhuresh Kumar of NAPM says, “We welcome the recommendations like consent of gram sabhas for acquisition.” But the committee has failed to provide any relief to the people whose rights are sacrificed on the altar of development. “We had proposed setting up of a national commission to ensure retrospective application of the provisions of rehabilitation and resettlement,” adds Kumar.

Vimal Bhai of Matu Jan Sangathan, a people’s movement opposing dams in Uttarakhand, says the committee has missed some vital points. “We had requested them to include a provision which will allow people to have a direct say in planning of projects, like dams, but this did not find any place in the report.” The government should give adequate power to people in development planning and not leave the job only to experts and the Planning Commission.