Progress in measles elimination has got stalled, says WHO

Developing countries mostly hit. More than 145,000 people died of the disease in 2013 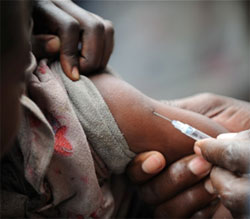 Progress towards the elimination of measles has stalled, warns the World Health Organization (WHO). According to data provided by WHO, more than 145,000 people died of measles in 2013 which is a significant increase from the number of deaths in 2012 at 122,000.

According to the data, which was published in WHO’s Weekly Epidemiological Report and the Centers for Disease Control and Prevention’s (CDC) Morbidity and Mortality Weekly Report, the estimated number of measles deaths in 2013 represents a 75 per cent decline in mortality since 2000, much below the target of a 95 per cent reduction in deaths between 2000 and 2015.
Despite being vaccine-preventable, measles is still an important cause of death and disability among children worldwide.

“Poor progress in increasing measles vaccination coverage has resulted in large outbreaks of this highly contagious disease, throwing the 2015 elimination targets off-track,” said Peter Strebel from the WHO Department of Immunization, Vaccines, and Biologicals.

According to the report,     while the increase in the disease in 2013 was in large part due to outbreaks in China, the Democratic Republic of Congo, Nigeria, sizeable outbreaks were also reported from other parts of the world. The European region has seen measles re-emerge with outbreaks in Georgia, Turkey and Ukraine.
“Countries urgently need to prioritize maintaining and improving immunization coverage,” said Strebel.

The vast majority of measles deaths are in poor countries, according to the data. In 2013, more than 70 per cent of global measles deaths were in six countries — India, Nigeria, Pakistan, Ethiopia, Indonesia and the Democratic Republic of Congo.

In developing countries it costs around US $1 to vaccinate a child against the disease. During 2013, 205 million children were immunised against measles through large-scale campaigns in 34 countries, including Cambodia, Cape Verde, Ghana, Jordan, Senegal, and Sudan.

WHO strongly recommends that every child receives two doses of measles vaccine. Measles is a highly contagious viral disease, which affects mostly children. It is transmitted via droplets from the nose, mouth or throat of infected persons. There is no specific treatment for measles and most people recover within 2-3 weeks. However, particularly in malnourished children and people with reduced immunity, measles can cause serious complications, including blindness, encephalitis, severe diarrhoea, ear infection and pneumonia.

Coverage of child immunisation and its determinants in India