Property industry in trouble in Punjab 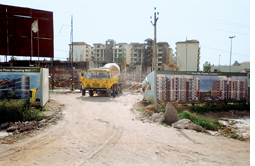 Property buyers in Punjab are in a fix, as are financiers and builders with housing construction projects in Panchkula and Mohali, satellite towns of Chandigarh. One of the most 'planned' cities in India with a rigid master plan, Chandigarh does not allow new private housing. This has driven a construction boom in the satellite towns. The problem this is where industrial units were located earlier--to keep them away from residential areas.

The limbo has resulted from some proactive measures by the environmental regulators to maintain a safe distance between polluting factories and residences. These were diluted over two years (see box Spaced out), and now the courts--angered by this compromise--have clamped down. Projects worth an estimated Rs 40,000 crore are at stake, and await fresh guidelines.
The Punjab Pollution Control Board (ppcb) had formulated in 2005 separate guidelines for siting of housing colonies with regard to their proximity with industries. It was the first state to come up with such regulation in the interest of public health and environment--the mandated distance between industrial units and housing was to be 500 metres. These guidelines were then diluted and the distance lowered to 200 m. Various officials says this was due to pressure from farmers whose land was being bought for the housing projects nobody was paying them for the 500-m buffer strip, resulting in lower revenues from land sale. After a series of dilutions, the board did a vote-face it revoked its no-objection certificates, leaving builders and buyers in the lurch. One builder moved the High Court of Punjab and Haryana. Even as the court hears the case, the state government has set up a committee under its chief secretary to draw fresh guidelines for siting of residential areas. But there are apprehensions the committee has no urban planners or housing experts. The results could be disastrous, warn builders.

Meanwhile, the Punjab Urban Development Authority (puda) has cancelled its permissions for 'change of land use' from farming to residential. puda officials refused to explain the reason behind this sudden move, and whether it is linked to the board's withdrawal of noc. "puda grants permissions after no-objection certificates are obtained from pollution control board, public works department, forest department, municipal committee concerned, chief town planner, and drainage department," says Som Parkash, chief administrator of puda at Chandigarh.

The number of projects for which puda land-use permissions or ppcb no-objection certificates have been cancelled is not known. The Punjab Colonisers and Builders Association claims 31 projects are affected; media reports say the number is 71. Parkash says 40 projects are affected.
Not all the problems are apparent; some are like time-bombs ticking. The burden of providing basic amenities like internal roads, streetlights, schools, water and electricity inside the housing projects lies with the builders. But the facilities needed outside the complexes are the government's responsibility. Private housing depends solely on groundwater--extracted through borewells. Builders told Down To Earth that they have had to plumb depths of more than 180 m to find potable water. With all housing societies promising round-the-clock water supply, groundwater in the area is considerably threatened.

Sewage is another problem. A primary treatment plant of 67 mld (million litres per day) capacity was constructed in the 1980s in Mohali. But now it is under-utilised due to the unavailability of a proper network. With a number of housing colonies coming up, sewage disposal remains a troubled territory.


To address the problems and issue fresh guidelines for siting, the state government called for a public meeting on June 2, seeking suggestions from the public. But the meeting went unnoticed. "About 60 people were present. Of them, 35-40 were builders, 10-12 industrialists and the rest, general public," said a builder. According to him, the proceedings of the meeting indicated that nothing much could be done about the distance between housing colonies and industries. "Industrial units will need to check pollution and adhere to norms," he said.

There is hope among builders that all their projects will get the nod. "We feel all the projects will be cleared," says Kulwant Singh, president of the Punjab Colonisers and Builders' Association. "We have been asked to stop construction till a decision is taken. Projects will not be cancelled. We are worried about the delay," says Rajit Kakar, managing director of Silver City Housing and Infrastructure Ltd. Builders argue factories have come up haphazardly and that they should be regulated--not the housing projects. But Yogesh Goel, chairperson, ppcb, says, "There is no reason for industries to move unless they do not function or do not follow pollution control norms."

The government is torn between local investment opportunities and environmental safety. ppcb needs to be clear about a policy to rightly accommodate urban growth. It also needs independence to function as a regulator.