Protests against methane mining in Chhattisgarh 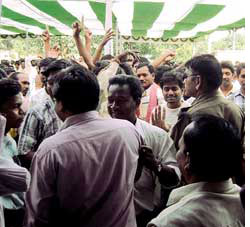 Residents of around 25 villages recently stopped the public hearing for a proposed methane extraction project. The 500-odd people from Gharghonda tehsil in Raigarh, armed with the Centre for Science and Environment's report on the project's environment impact assessment (eia), said the eia was weak and proceedings were not transparent.

Australia-based Arrow Energy, with gail India and Energy Infrastructure Group, a Swedish company, plan to explore methane over 643 sq km in Raigarh and Korba districts. The public hearing, mandatory for environmental clearance, was conducted on November 11. Residents of villages under Gharghonda termed the hearing "illegal".

"According to the eia Notification, 2006, proceedings of a hearing should be conducted within 45 days of an eia report being submitted to the state pollution control board. The company had submitted the report in June, the 45-day period is long over," says Rajesh Tripathy of Jan Chetna Manch, a local ngo. After people walked out of the meeting midway, the additional district collector of Raigarh had to call off the proceedings. Activists allege they were not informed of the hearing and claimed ignorance on the project.

The Centre for Science and Environment (cse) study shows that the project, at its production stage, may impact hydrology, agriculture and biodiversity adversely. It notes that the water that comes out when methane is extracted is highly polluted but the eia makes no mention of this.

Called coal-bed methane water, it is saline and comprises fluorides and heavy metals. Such water has a high sodium absorption ratio--a measure of sodium concentration in soils relative to that of calcium and magnesium--which goes up to 31.

The prescribed limit for sodium absorption ratio is 26 for effluents or wastewater. Anything above 26 is bad news for crops because excess salts affect plants physically and chemically.

The eia report does not assess the damage the project will cause due to construction of pipelines and roads; and storage of methane and disposal of coal-bed methane water.

It is feared that the project will cause surface and groundwater contamination and affect groundwater availability when the exploration wells produce methane on a commercial scale.

Methane is inflammable. Risk assessment and disaster management plans thus become very important because a majority of the land through which pipelines will pass is under forests occupied by human habitation. The eia report has failed to assess the risk associated with storage of methane and pipelines when production beings on a commercial scale. It does discuss some risks associated with exploration but it is at the production stage that the project will affect the environment.

Raghuveer Pradhan of Ekta Parishad, a grassroots organization protesting the project, said information on land use and forest cover was inconsistent. The cse study found the executive summary of the eia report pegs forest area at 8 per cent of the total land; the soft copy of the report at 33.63 per cent and the hard copy at 34.8 per cent.

Statistics on water are also contradictory: the executive summary says water bodies in the area constitute 0.2 per cent of the total land; the eia report puts the figure at 6.62 per cent.

The eia claims absence of rare and endangered animals in the area but animals such as leopards, bears and elephants are found in the forests there. Leopards are declared endangered and bears fall under the category of animals that need immediate protection.

There is also no mention of an existing elephant corridor in the area, which will be affected if the project is given the go-ahead.