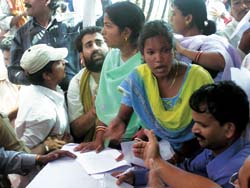 kujang, Jagatsinghpur district, Orissa, April 15, 2007 a contingent of armed policemen at B B High School testifies to mounting tension. The school is the site for a public hearing organised by the Orissa Pollution Control Board. The environmental ramifications of the contentious Posco steel project is up for discussion. But the meet ends before the officials can even reply to questions raised by the people.

The environmental impact assessment of the South Korean giant Pohang Steel's proposed Rs 5,100-crore Posco steel plant was on the agenda.But a vocal section of the crowd wanted officials to answer a simple question "What is the use of a public hearing when there is no peace in the project area?"
Seventeen kilometres from the school is Dhinkia village where activists of Posco Pratirodh Sangram Samiti (ppss), resisting the steel plant touted as India's biggest fdi project, have dug in their heels.Fear and suspicion is rife, and the massive police deployment hasn't helped matters. Orissa's steel minister, Padmnabh Behera says that the force has been deployed to conduct panchayat polls in Dhinkia panchayat.

"We know this is just a ruse. You don't need 12 armed platoons to conduct panchayat elections," said ppss activist, Rojalin Bardhan. The determination of activists remains a major worry for government and Posco officials. The project has made little headway since the June 22, 2005 memorandum of understanding for setting up the 12 million tonne per annum capacity steel plant. Land acquisition has been the most difficult part.

Nobody is willing to hazard a guess on how soon the 1,620 hectares (ha) required by the company in the three panchayats of Dhinkia, Gada Kujang and Nuagaon will be acquired. Of that, 1,444 ha is government land. It has sanctioned 460 ha to Posco but the company is yet to get possession because of the agitation. The agitators received a boost with leaders of Orissa Gana Parishad, cpi, cpi(m) and the Janata Dal (s) submitting a memorandum to the prime minister demanding shifting of the project. "Let the project be shifted to barren stretches instead of fertile agricultural land," the memorandum said.
The demand for shifting the project has been raised repeatedly as local people fear it will affect their livelihood sources. Among other things, it will be a death blow to the betel vines. Betel leaves from the area are exported to Mumbai, Solapur, Ahemedabad and Kolkata and from there to Pakistan, Singapore and several Arabian countries. The annual turnover from the trade is estimated at around Rs 10 crore. "Nearly 1,200 people are engaged in betel farming. Which government or company can compensate us for such loss?" asks Bishnu Charan Das of Nuagaon.

People in the project area also grow a single crop of paddy, which, coupled with the returns from the betel trade, is enough to keep them going. What they have at the moment seems far more lucrative than the Orissa government's compensation package which promises employment to one person per displaced family and a one time cash assistance extending up to Rs 5 lakh.


ppss has suggested the relocation of the project, 10 km from the present site. But Posco says the option is not viable because the alternative site is not suitable and that it will add to the cost.

The project area has become a war zone with frequent clashes between ppss and rival groups. "We want the project on our terms. We are not satisfied with what is being offered but we prefer talks to violence," says Tamil Pradhan, leader of Posco Jan Sampark Vikas Parishad. Another pro-Posco leader Bijay Kumar Das argues "We want the project if people are offered the right kind of compensation." Das feels there is no point holding a public hearing if people in the area do not feel secure. But the government is trying to suppress the movement. Posco spokesperson, Shashank Patnaik, assures the company will set up the project with local participation, but there are not many takers for this.