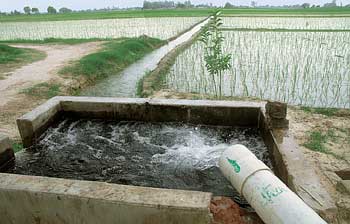 on november 9, papers in Punjab ran stories about a study exposing high levels of pesticides in blood samples of people in the state. Pesticides were also on the agenda that day at a symposium at the Punjab Agricultural University in Ludhiana. But the "experts" gathered at the meet were not there to allay concerns raised by the report. Their energies were, in fact, directed at dispelling "myths" about pesticides.

Speaker after speaker, mostly from the university and the pesticide industry body, Agro-Chemical Promotion Group (apg), denounced ngos for "spreading rumours about pesticides". "Judicious use of pesticides" was held to be imperative for the country's food security and a study by the Post Graduate Institute of Medical Education and Research (pgimer), Chandigarh, linking pesticides to the rise in cancer cases in the cotton belt of Punjab, was vehemently criticized.The meet did not take any note of a new study revealing disturbing levels of pesticides and industrial effluents in five major drains of Punjab Buddha drain in Ludhiana and adjoining districts, Hudiara and Tung Dhab drains in Amritsar and adjoining districts, East Bein and Kala Singha drains in Jalandhar and adjoining districts. The study was initiated by researchers of the Guru Nanak Dev University, Amritsar and taken forward by scientists at the department of community medicine, pgimer, and the Punjab Pollution Control Board (ppcb). The researchers aimed to find effects of water pollution on health of people living along the five drains.

Their conclusions were alarming. Vegetable, food, milk and blood samples had high pesticide residues. Heptachlor, b-endosulphan and chloripyriphos residues in groundwater exceeded the maximum residue limit fixed by the state's health department by 25 per cent, 21.5 per cent and 16 per cent (see box Findings of the report). ppcb's member secretary, Birendrajit Singh, gave Down To Earth an insight into the possible reasons behind the contamination. "Local bodies dispose domestic waste water into the drains. Pesticide-laced agricultural runoff also goes into these drains, so does industrial effluent. A lot of this cocktail of chemicals, heavy metals and pesticides, seeps underground, contaminating the groundwater."

This contamination is having a serious bearing on the health of people, the study concludes. According to J S Thakur, assistant professor, department of community medicine, pgimer, 65 per cent of the blood samples showed varying degrees of genetic mutation. Gastrointestinal diseases like diarrhoea, water-related vector-borne diseases like malaria, skin and eye ailment were common among people living along the drains (see interview The industry's being conceited).

Thakur was approached with an invitation to attend the November 9 symposium, which he declined. "I did not receive any invitation from the Punjab Agricultural University, though R Sundareshan, apg' s general manager communications, did approach me. I declined his offer, and gave him a 200 page document containing over 1,000 studies linking pesticides to cancer, instead. The organizers of the symposium are being very conceited in refuting these studies," he says.

But then who organized the symposium? On paper the Punjab Agricultural University and the state's agriculture department. But in fact, it was dominated by the pesticide lobby. Open invitations were sent out and signed by apg on behalf of the university. The preponderant role of a body comprising three associations of pesticide companies--Crop Life India, Crop Care Federation of India (comprising 65 Indian companies) and Pesticides Manufacturer and Formulators Association of India--has drawn a lot of flak. Many feel that the Punjab Agricultural University is playing into the hands of the pesticide lobby. N S Butter, head of the university's entomology department that had organized the symposium, however, disclaims any knowledge of invites being sent by apg. "We wanted wide coverage and dispatched invitation cards to people from different walks of life. But we did not give any agency the authority to misuse the university's name," he said. The university's vice chancellor, M S Kang also expressed ignorance of the open invitations. When Down To Earth showed him copies of the open invitation he could only say, "I have never seen this letter before." He alleged that apg had misused the university's name but refused to commit to any legal action against the industry body.

apg has a different version. "The university asked us to support the meet since the industry stood to benefit from it. We were asked to invite whoever we wanted to," Sundareshan said. "We wanted to give the symposium a national perspective so we hired a public relations (pr) agency," he added.

Findings in the report

Aldrin, malathion, dimethoate and b endosulphan more than the permissible limit.

Flouride more than the permissible limits 1.5 mg/litre. None of the samples had fluoride level below 0.5 mg/litre

Evidence of micro nuclei in ephithelial cells higher in smear from samples near Hudhiara Nullah. This is an indicator of evidence of genetic damage

The invites sent out by the pr agency to journalists in Delhi reveal the reasons behind the event. "The presentations will highlight the importance of agrochemicals ensuring food security and expose the hidden intent of a number of... ngos," it says. The symposium's agenda was nothing more than countering health and environmental issues raised by ngos," says a Punjab Agriculture University professor.

The manner in which the event was organized has outraged many a faculty member at the university. "apg had almost 'hired' journalists from Chandigarh and Delhi. Their travel and stay was arranged for. How could an industry body do all this on behalf of the university?" asks a faculty member. There are murmurs on the campus that the university's labs are being gradually taken over by multinational pesticide majors. "The past few years the Punjab Agricultural University has received funds enough only to disburse salaries. A lot of research on the campus is actually being funded by private companies. So it won't be surprising that we have research favouring these companies," says another faculty member.

Farmers too were angry at the fact that an agriculture university should join hands with a pesticide body. "We should have received invitation from the university. We were sent invitations from apg. Why is the pesticide company hijacking our university?" asks Harminder Siddhu, a physician and a farmer from Ludhiana district. Farmers present at the symposium were given only the last few minutes to express their opinion, he said.