Railways pulled up over scavengers

ON October 10, the Delhi High Court came down heavily on the Union Ministry of Railways and asked it to submit a detailed plan with “specific time frames and targets” to eliminate manual scavenging. It has asked the ministry to submit the plan by November 21.

But the relief may be short lived as Parliament has cleared a bill that allows manual scavenging if individuals are provided with protective gears. 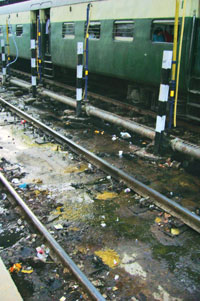 The Indian Railways, which has one of the world’s largest rail networks, is said to be the biggest employer of manual scavengers. It has been under scrutiny since 2003, after Safai Karamchari Andolan (SKA), a union of manual scavengers, filed a public interest petition in the Supreme Court. The petition had sought proper implementation of the 1993 Act that bans manual scavenging and recommends their rehabilitation. In 2011, the apex court handed over the part of the case dealing with the railway ministry to the Delhi High Court.

While the ministry denies employing manual scavengers officially, the affidavits it has submitted in the court in the past nine years suggest that barring a few trains, the railways does not employ any technology to keep its 80,000 toilets and 115,000 kilometres of tracks clean (see box). A senior official with the ministry, who does not wish to be named, says, “A few people are employed for cleaning rail tracks and dry latrines through contractors but they are given protective gear and cleaning implements.” Bezwada Wilson, convenor of SKA, says it is difficult to count how many manual scavengers work for the railways as they are employed as sweepers.

The bill that aims to replace the Employment of Manual Scavengers and Construction of Dry Latrines Act of 1993 says individuals if provided with protective gears while cleaning human excreta cannot be labelled manual scavengers.

Shomona Khanna, senior advocate representing SKA, says the bill talks about identifying and rehabilitaing manual scavengers. But it does not mention actions to be taken against erring authorities. It also remains silent about who should rehabilitate the manual scavengers.

While the 1993 law had problems, Wilson says, it stressed on the use of technology and innovations to replace manual scavengers. The 2012 bill stresses on how to eliminate manual scavengers. Even their elimination is not required if protective gear is provided, he adds. Wilson points out more problems. A clause in the bill allows the ministry to decide when it wishes to notify the law for the railways. “Parliament should decide when the Act should be implemented, not the perpetrator,” he adds.