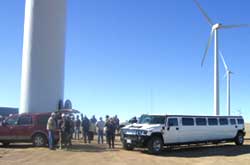 In a historic verdict, voters of the Colorado state in the us have approved the mandatory use of a certain percentage of renewable energy by electricity utilities. It is the first time in the country's history that people voted directly for such a standard. They approved the Amendment 37 in a poll that was conducted simultaneously with the presidential elections held on November 2, 2004.

As per the standard, the state's largest electricity utilities, with at least 40,000 customers, will be required to buy at least three per cent of their electricity from renewable energy sources by 2007, six per cent by 2011 and 10 per cent by 2015. Currently, less then two per cent of Colorado's electricity comes from such sources. The intitiative also requires utilities to offer customers a rebate of us $2.00 per watt of electric power and other incentives for solar electric generation from small photovoltaic sources. It mandates the sourcing of four per cent of the renewable electricity from solar energy resources.

The people's approval of the standard is especially significant since the Colorado legislature had rejected the renewable energy portfolio standard four times. The last rejection was made earlier this year. Proponents of renewable energy then decided to seek the opinion of the voters through the ballot. "Noting that Colorado's legislature has failed to act, Ballot Initiative 37 affords the citizens of Colorado an alternative means for moving the state's economy towards a cleaner energy future," said Sustainable Energy Coalition (sec), a Washington dc -based 21-member group that supports renewable energy.

The proposal was backed by 52 per cent voters. But critics warn that the move might lead to rise in costs and, thus, consumer bills. x cel Energy, the state's largest electricity utility, has warned that bills could increase by several hundred million dollars. It has also claimed that the burden of the increased cost would have to be borne by businesses because the amendment caps residential increases at 50 per cent per month per household.