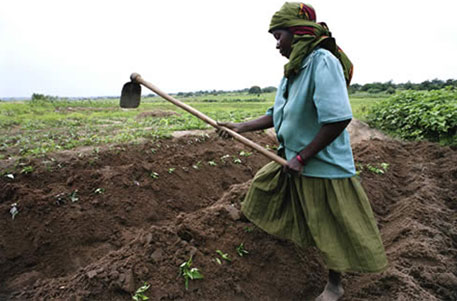 Indian origin businessman Chinnakannan Sivasankaran has engaged in aggressive land grabbing of more than half a million hectares across Africa, Asia and South America, putting millions of livelihoods at risk. This was revealed in a detailed report released by Barcelona-based non-profit GRAIN on Tuesday.

The report says Sivasankaran diverted 0.56 million hectares of food-producing land to production of palm oil, destroying the food sovereignty of local communities. All these lands are owned, directly or indirectly, by several of his group’s subsidiaries companies.

GRAIN (Genetic Resources Action International) is an international non-profit organisation which works to support small farmers and social movements in their struggle for community-controlled and biodiversity-based food systems. The report titled “Feeding The One Per Cent” examines in detail Sivasankaran’s involvement in land grabbing, tax-evasion, kickbacks and payouts to directors of his group companies.

The report says he started grabbing land under the garb of agribusiness during the global food crisis of 2007-08, when massive private sector investments were made in agriculture to increase food production. At the time, there was wide consensus among the G8, World Bank and corporate investors that investment in agriculture would create more jobs, more food and also, more innovation.

The report claims that instead of investment, a coterie of investors threatened to destroy the livelihoods of millions of people by grabbing their land in the name of food production, in most cases without their consent, and converting it for the production of palm oil.

According to the report, Sivasankaran is the single largest land holder, on paper, in the world. Since 2008, the Siva group, of which Sivasankaran is the chairperson, and its many companies have acquired several thousand hectares of land across Africa, the Americas and Asia. Poor rural communities of Africa have been particularly affected.

What was Sivasankaran’s modus operandi?

The report says Sivasankaran made his initial fortune, estimated at US $4 billion, from mobile networks, broadband Internet services, and the sale of discounted personal computers in India.

He then entered the commodities market and started investing in palm oil shortly after the food crisis of 2007-08. Today, India is the world's largest consumer of palm oil. As the cheapest of all vegetable oils, palm oil is always in high demand in the production of processed foods, cosmetics and biofuels.

The report claims he began by buying shares in several Indian vegetable oil processing companies like Ruchi Soya and KS Oils that were making forays into palm oil plantations. His involvement in the industry increased when he set up a palm oil company.

Sivasankaran first bought olive farms in Argentina's Catamarca province. He invested in agribusiness through a complex web of offshore subsidiary companies involved in land takeovers and turned them into farms for palm oil production.

Holding company Siva Group is headquartered and registered in Singapore, while Broadcourt Investments, a shell company, is located in the British Virgin Islands. The report says these two companies are the key conduits for Siva’s investments in oil palm plantations. Money flows through these companies into more offshore jurisdictions and eventually, finds its way into the companies set up to actually take over lands and run oil palm plantations.

In most of these companies, he bought stakes through obscure ventures set up by people involved in mining and logging industries. According to the report, these people were politically connected and helped in acquiring vast areas of land for palm oil production.

In Liberia, Sivasankaran bought a controlling interest in UK-registered Equatorial Palm Oil, with claims to two concessions. One was a staggering 700,000 ha concession secured for around $3 million from two anonymous companies registered in the British Virgin Islands; the other, a controversial land deal involving people close to Liberian president Sirleaf. This land deal has degenerated into violent conflicts with the local community who refuse to give up their lands saying they were never consulted.

In Sierra Leone, a series of concessions were secured by UK army veteran Kevin Godlington on behalf of British businessmen. These were eventually sold to Sivasankaran. Each case displayed the same pattern of different companies with the same address. Deals were closed through pressure on chiefs of local communities. The members of these communities are adamant that they had never agreed to part with their land.

In Côte d'Ivoire, Sivasankaran bought DekelOil, a company based in the tax haven of Cyprus and listed on London’s AIM stock exchange. His stake raised money for the ambitious plan to lease lands for oil palm plantations and contract-growing in the Guitry region. Administration expenses here have totalled 10 times more than the operating costs as Dekel's executives draw generous salaries and bonuses. Local community leaders say they never negotiated leases for their land and deny the company’s official claim that a deal for the lands was signed.

In DR Congo, in 2009, financial expert Ravi Sood from Toronto promised to revolutionise African agriculture with a bold new startup called Feronia. Sood raised $20 million from Sivasankaran and the remaining money from his own funds to buy an old Unilever plantation. This company has declared escalating losses every year, its stock price has tanked and local communities say working conditions and services provided by the company to the community have deteriorated badly. This has not stopped Feronia from making handsome payouts to its directors, one of whom is said to be a right-hand man of the country’s president, Joseph Kabila. Nor has it stopped the UK’s CDC Group and other European development finance agencies from taking over the company and bailing out its shareholders last year.

In Papua New Guinea in Oceania, Sivasankaran-owned Geoff Palm, based in the tax haven of Labuan, Malaysia, took control of a 110,000-hectare concession in East Sepik Province that belonged to 230 local clans. The report claims it was converted to a special lease behind their backs and snapped up by a local member of parliament, who then leased it to a mysterious Australian company, SPV. A month later, SPV sold it to Geoff Palm. Locals say they haven't even seen the papers that transferred their lands and don't know who signed them.

According to a press release, GRAIN researcher Devlin Kuyek says, “The companies Sivasankaran has invested in are far better at funnelling generous payments into the pockets of their directors than they are at producing food.”

“Sivasankaran symbolises a new wave of investors that are stripping peasant farmers of the main assets they need for their livelihoods and for producing food for their communities – their lands,” he adds.

According to the report, the governments of these countries also colluded with Sivasankaran and twisted rules to favour him, citing the inflow of foreign investments.

“Instead of protecting local people or holding investors to account, governments are providing these investors with generous incentives and support. The door is, thus, left wide open for financial players like Sivasankaran to grab lands and make quick profits, permanently undermining food systems and the livelihoods of farmers in the process,” GRAIN says in its press release.

The report proposes alternate methods of palm oil production that can benefit local communities. It cites the example of palm oil cooperatives in Honduras which are owned and controlled by peasants. It also mentions traditional oil palm cultivation and processing on mixed farms or semi-wild groves in west and central Africa as an even stronger model of how local people, especially women, can reap economic and social benefits.

The great land heist: how the world is paving the way for corporate land grabs