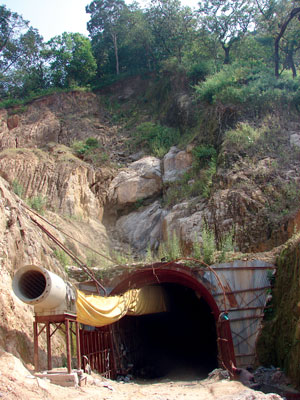 After refusing a World Heritage Site tag by UNESCO for its pristine Western Ghats early this year, the Karnataka government has recently shelved a proposal to upgrade the conservation status of 12 reserve forests in the mountain range. Conservationists allege the government is keeping the Western Ghats out of the inviolate zone because such a move does not suit its political and commercial interests.

The proposal was part of the forest department’s long-term plan to connect all national parks and wildlife sanctuaries in the state, scattered over 650,000 hectares, by adding some 200,000 ha forest patches in between or adjacent to them. One of the biggest projects was expanding Pushpagiri wildlife sanctuary in the Western Ghats by merging 12 adjacent reserve forests to it. The state wildlife board forwarded the plan to the state government for approval of the National Board for Wildlife (NBWL) in October. The government did send it to NBWL, but after removing Pushpagiri expansion plan.

The proposal upset Union corporate affairs minister Veerappa Moily. On October 7, unaware of the deletion by the state government, he wrote to Union environment minister Jayanthi Natarajan to reconsider the Pushpagiri expansion plan. Moily, who is from Dakshina Kannada district, said in his letter (copy of which is with Down To Earth) that the residents of Shiradi, Uppinangady and Subramanya villages in the district feared losing their land once the reserve forests are converted into sanctuary. The environment ministry forwarded the letter to the state forest department seeking a detailed report on the issue.

The forest department says its proposal includes only the reserve forests where the rights of people have been settled and does not include villages or agriculture land. “Some vested interest groups want to sabotage the proposal,” said B K Singh, principal chief conservator of forests (wildlife) of Karnataka, in his letter to the ministry in November. 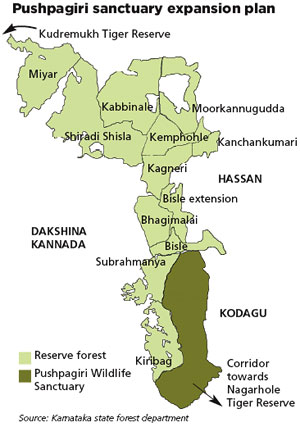 Spread over 10,000 ha, Pushpagiri sanctuary has a good number of tigers, elephants and rare lion-tailed macaques and sloth bears. It is declared as an Important Bird Area. By merging the reserve forests to it, the forest department aims to make it contiguous with other protected areas in the Western Ghats. Pushpagiri lies at the junction of the southern and norther ranges of Western Ghats. Towards the south, wildlife migration corridors extend from Pushpagiri to far away Wayanad Tiger Reserve in Kerala via Nagarhole and Bandipur tiger reserves. In the north, the 12 contiguous reserve forests act as vital corridors, connecting Kudremukh and two other tiger reserves in the state. With 288 to 333 tigers, Karnataka boasts of the highest tiger population in the country. The expansion plan says upgrading the status of these reserve forests will help reduce man-animal conflicts in the region as more funds will be available to erect barriers like electric fence.

But once a forest is declared sanctuary no non-forestry activity can be carried out in it without the permission of the Centre and the Supreme Court. Allegations do the rounds that this would have been a threat to the hydel power, mining, timber and tourism lobbies operating in the area.

The 12 reserve forests have the headwaters of several tributaries of the river Nethravathi. This makes them attractive for mini run-of-the-river hydel projects. The state renewable energy development agency has permitted 15 mini-hydel projects in these forests. Three are operational, while a project by Maruthi Gen Ltd, a Bengaluru-based power company, is under construction. The rest could not start work on their projects as the high court in April ordered a temporary halt on new mini hydel projects in the Western Ghats.

The court order was in response to a public-interest petition by the Western Ghats Environment Forum. The conservation group says though considered environment-friendly, a large number of projects in a particular area will affect the river flow and lead to fragmentation of forests due to setting up of roads, power lines for transmission and labour colonies, affecting biodiversity. So far the state has permitted 137 mini hydel projects across Western Ghats; 27 are on the Nethravathi and its tributaries.

Mini hydel projects are highly lucrative as they get subsidies from state and Central governments under renewable energy development schemes and can also avail benefits under the clean development mechanism of the United Nations Framework Convention on Climate Change. Since such projects are usually of capacity below 25 MW and do not require more than 5 ha, the company does not need to apply for environmental clearance and can obtain forest clearance from the regional office of the Union environment ministry. 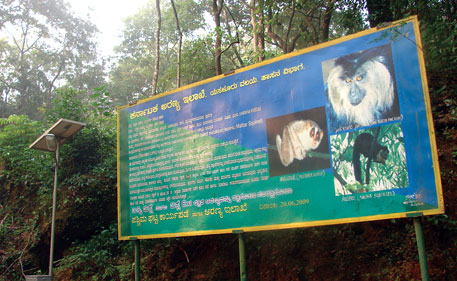 Sanjay Gubbi, a conservation biologist who has worked extensively in the area, says the mini hydel project lobby is strong enough to politically influence the state’s decision. This is evident from the way Maruthi managed to get permission for its mega hydel project, projecting it as two mini hydel projects. When forest range officer of the area discovered the fact, she lodged an FIR on October 17. The FIR says the company carried out illegal constructions, dug the hills to reduce the height, dumped debris in the forest and along the banks of the river Hongadall, restricting its flow and endangering the flora and fauna. It illegally carried out explosions in the forest, causing landslides at many places.

Construction on the project was stopped after the FIR was filed. However, when Down To Earth visited the site on December 3, a meeting was going on between forest officials and representatives of the company. A company employee in-charge of construction said they have got informal permission and would resume work from the next day.

People benefiting from such projects are instigating people in surrounding villages to oppose the expansion of the sanctuary, says Bhuvanesh of non-profit Pushpagiri Wildlife Foundation. The forests have rich gem stone reserves, he adds. More than 10 ha in and around Kiribag and Bisley reserve forests are under illegal gem stone mining. People from nearby villages who are involved in the mining say they mine 15 to 20 kg of gem stones per acre (0.4 ha) every day. They get paid Rs 450 to Rs 1,500 for a kg of gem stones, which are then sent to jewellery manufacturers in Gujarat and Maharashtra. Besides, once the forests become sanctuaries people will not be able to harvest timber legally or illegally, Bhuvanesh adds.

A source in the forest department says, the villages around the reserve forests are a strong bastion of the state’s BJP government. Elected representatives from these areas are spreading the information that people may lose their land to the sanctuary expansion. They are also misguiding the chief minister that the development of their regions would be hindred because of the expansion. The chief minister perhaps stalled the proposal to handle the delicate political situation in the state, he adds.