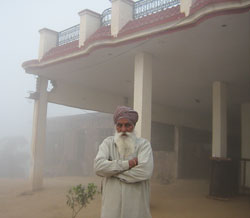 JAGPAL SINGH and Dev Singh of Jagir Rohar village in Patiala have little idea that their enmity has resulted in a landmark judgement by the Supreme Court that would bear implications for the rural population of the country.

In its January 28 decision in the case concerning encroachment of common land by Jagpal Singh, the apex court directed all state governments to prepare schemes for the eviction of those occupying village commons and restore them to the community. It asked the states to submit compliance reports by May.

Activists have hailed the judgement. Common property resources, which constitute 15 per cent of the country’s total area, are shrinking at the rate of 1.9 per cent every five years due to encroachment, as per the National Sample Survey Organisation. Since Independence, more than 834,000 hectares of village commons have been encroached. Village commons include everything from pastures, forests and common threshing grounds to ponds, irrigation channels and rivers, and play an important role in rural economy (see ‘India’s commons’).

“We cannot allow the common interest of villagers to suffer merely because the unauthorised occupation has subsisted for many years,” the court said in its ruling, rejecting Singh’s claim over a little more than one hectare (ha) of the village common land.

It all began in 2003 when the gram sabha of Jagir Rohar approached the district collector against Jagpal Singh who was constructing a house on the common land that extends over 6.8 ha. The revenue records list the land as gair mumkin toba or village pond, though just a patch of it shows signs of a pond, covered with water hyacinth.

Residents said the waterhole acts as a sink for stormwater from the village and is used by cattle. People use the rest of the land for tending cattle and storing fodder. Gujjar families who visit the area in winters also camp there.

“As many as 77 families live on the land but the case was filed only against me. Dev Singh and his relative influenced the panchayat to do so owing to a previous grudge,” Jagpal alleged. “I have been staying here since the time of my forefathers. If they committed a mistake, I am ready to pay for it. But it’s not easy to construct a house these days,” he said, appalled by the judgement.

Most people in the village have houses on the land, said Gurnam Singh, a resident. They first set up a cattle shed and eventually convert it into a pucca house. This usually happens when the population increases. So no one had ever objected to it, not even the panchayat, he added. Jasveer Singh, another resident, said, “The case started as a fight between two parties in the village. Poor people like us are now being dragged into it.”

The panchayat, now under a new sarpanch, Narendra Singh, who happens to be Jagpal Singh’s relative, recently appealed to the high court saying action should also be taken against others living in the panchayat land. It submitted a list of 77 people to the court that includes names of Dev Singh and Baldev Singh.

“The list just names people randomly,” clarified Jaswant, Dev Singh’s son. Some poor people do stay there but most have just fodder sheds. Jagpal Singh influenced the panchayat to do this to save his own skin, he alleged. The district development and panchayat officer of Patiala said his department is carrying out demarcation of the commonland in Jagir Rohar that has been encroached.

This is not a one-off case in Punjab, but the government hardly takes action against such encroachers, said forest rights activist Madhu Sarin. The scene has changed after the Green Revolution. People now do not seem to depend on the commons. They are encroaching land for cultivation. In some cases people have comfortably divided the gram sabha land among themselves, she said.

“Regularising such illegalities must not be permitted because it is gram sabha land which must be kept for the common use of villagers,” the Supreme Court noted in its ruling. “Our ancestors were not fools. They knew that in certain years there may be droughts or water shortages and water was also required for cattle to drink and bathe in etc. Hence they built a pond attached to every village, a tank to every temple.

These were their traditional rain water harvesting methods which served them for thousands of years,” the ruling noted. Regularisation, however, should be permitted in exceptional cases, for example, where lease has been granted under some government notification to landless labourers or members of Scheduled Castes and Tribes, or where there is already a school, dispensary or other public utility, the court said.

“The judgement came as a pleasant surprise,” said Jagdeesh Rao of the Foundation for Ecological Securities, a nonprofit in Gujarat. “It would not be easy to take the commons back from encroachers. However, the ruling gives some basis on which people can fight for their rights,” he said.

“About 200 ha of grazing land in Mundra in Gujarat on which Maldharis and other native villagers used to depend has gone into the special economic zone. We hope the order will help us get the land back,” said Bharat Patel of Machimar Adhikar Sangharsh Samiti, a non-profit that opposes industrialisation in Kachchh. As per an estimate, livestock in the state face a deficit of 2.5 million ha of grazing land.

The judgement has ignited hope among residents of Kalpavalli village in Ananthpur district of Andhra Pradesh as well. A wind firm is eyeing 2,832 ha of wasteland which people have revived over 17 years. “Every day 40,000 sheep cross the area. But it is designated as revenue wasteland,” said Mary Vattamattam of Timbaktu Collective, a nonprofit that helped regenerate vegetation on the wasteland. She hopes the judgement would help Kalpavalli community get ownership over the revived land.

“It is a laudable order,” said Supreme Court advocate Rajiv Dhavan. It asks the government to restore the common land and evict people who are illegally occupying it but still preserves orders that have allotted land for public institutions like schools. Its implementation seems difficult, though.

On the one hand, it is an exhortation to restore common land and on the other, an invitation to litigations from those who would lose encroached land, Dhavan said. He was referring to part of the order that says all government orders allotting gram sabha land to individuals or commercial enterprises on payment are illegal and should be ignored. The order implicitly says the government has no power over the commons, he added.

One fear is this judgement might be used against the poor rather than getting hold of the big fish, said Viren Lobo of the Society for Promotion of Wasteland Development, a non-profit in Delhi. For instance, the government removed slums to save the Yamuna bed but constructed the Commonwealth Games village at the same site, he said.

“The judgement says very little about acquisition of the commons by the State,” said Sarin. For instance, in places like Delhi and Chandigarh, the governments took over villages for urban development. Punjab and Haryana governments are now following suit. How can such government orders be ignored after they have been implemented?

The judgement would still be handy for fighting cases like Jaitapur nuclear power project where the government is acquiring common grazing land, said Sarin, adding, “Then it will be law versus the government.”