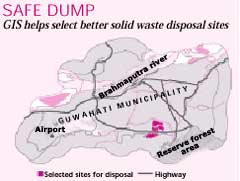 a recent study mapping the municipal solid waste (msw) produced and dumped in Guwahati, the chaotic capital of Assam, has shown its waste disposal system is getting choked and the city needs to quickly find a scientifically determined alternative to get out of the mess.

The study used geographic information systems (gis) based modelling to find suitable alternatives for msw disposal. Rajasmita Goswami and her fellow students of the Geology department of Guwahati University used existing ward maps superimposed with liss iii satellite images combined with toposheets to create a base of information. Over this base, they created several layers of information reflecting parameters such as hydrology, landuse, drainage and demography. The researchers then screened out sites that fell too close to roads, habitations or water bodies. The research found that all prominent dumpsites failed to meet the most basic standards for safe disposal. The study was able to delineate two new sites, each covering more than one square kilometre (sq km) that matched all laid down criteria.

Spread over 230 sq km, Guwahati is home to about 1.5 million people. It generates about 500 tonnes of waste daily which is dumped indiscriminately in low lying areas in an unsorted form. The garbage thus disposed has become a serious geo-environmental problem for the state capital. The frequent floods that the city is prone to worsen the problem.

Sarat Phukan, who teaches at the department and was a guide for the study says, "While our study is preliminary in nature and we have begun a far more intense study, this one shows that the city itself has not done anything to manage the waste. With increasing urbanisation the situation could get worse if we don't look at issues scientifically."