India to work together with the US to launch satellites 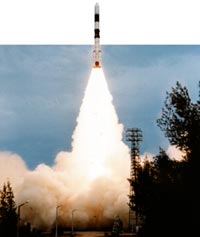 if one thought that the Indian Space Research Organisation (isro) getting a us $10 million contract to launch an European satellite is a pleasant aberration, then wait and watch. Many more such surprises are in store. Discussions held during a recent conference indicate that isro may soon be rubbing shoulders with the us space organisations, even for launching us satellites. If this materialises, it would be a perfect role reversal for isro, which had approached the us National Aeronautics and Space Administration (nasa) some 25 years ago to build and launch its first communication satellite, insat-1a.

The conference, held from June 21-25, 2004, also proved that the stringent sanctions imposed on India by the us in the wake of 1998 nuclear tests are a thing of the past. A high-powered us delegation descended on Antariksh Bhavan -- the headquarters of isro in Bangalore -- for the conference. It included scientists from nasa, the us National Oceanic and Atmospheric Administration (noaa), representatives of the us departments of commerce and agriculture and heads of several American aerospace corporations. Along with their Indian counterparts, they worked out a comprehensive blueprint for future space cooperation. They identified earth observation, atmospheric sciences, planetary observation and space applications as the areas of mutual interest.

As the first step, isro will work along with noaa to launch the National Polar-orbiting Operational Environmental Satellite System (npoess) by 2009. isro will host one of the 15 global data reception stations of npoess, which will gather data on the Earth's weather, atmosphere, oceans and land surface. The information will be disseminated to the member countries of the Switzerland-based World Meteorological Organisation.

Post-conference, Boeing Satellite Systems, which is part of the world's largest aircraft manufacturer Boeing Corporation, received a clearance from the White House to hold technical discussions and share data with the Indian space establishment -- a step that precedes 'exploration' of joint ventures between the high-tech us corporations and foreign entities. Boeing is said to be particularly interested in using a satellite system called i2k (insat 2000-kilogramme class) Bus, which has been designed and developed by isro. The i2k Bus is a complete assembly of systems/subsystems required for a satellite except the payload (the operational component of a satellite). "We (isro and Boeing) are discussing whether we can incorporate their payloads in the Indian satellites and jointly market them abroad," isro chairperson G Madhavan Nair told Down To Earth.

Will this new-found cooperative spirit last for long? No one knows the answer. But whatever maybe, nasa -- an entity with 30 times more resources than isro -- seeking out the Indian scientists is certainly a proof of the fact that India has emerged as a space power. Recently, isro even won a prestigious contract from the European Union to launch a medium class satellite. It has already launched several smaller satellites for countries such as Korea, Belgium and Germany.