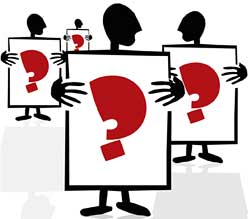 An 85-year-old lady was having problems getting her passport. She needed it to go and live with her children abroad. The status, the website showed, was delivered. Visits to the passport office yielded little results. "We helped her draft a right to information (rti) application. When the department concerned was informed of the application, she got the passport immediately," says Shekhar Singh of National Campaign for People's Right to Information (ncpri), Delhi. But not all rti applications are as smooth and appeals against disclosures are common. The rti Act, which came into existence three years ago, is now undergoing a review of its performance. Here too, the issue has triggered a debate on the agency conducting the appraisal.

The department of personnel and training (dopt) under the Union Ministry of Personnel, Public Grievances and Pensions has commissioned international accounting firm PriceWaterhouse Coopers the responsibility to review the rti Act 2005. Activists say the study may end up protecting government officials. They are conducting a parallel study on how far the rti has been able to keep up its mandate of providing timely response to "citizens requests for government information".


The accounting firm will review rti implementation in Assam, Andhra Pradesh, Uttar Pradesh, Maharashtra and Orissa. "It will study whether the act has reached the grassroots or is just being used in urban areas. It will look into problems that information officers and seekers face and how the act can be streamlined better," said K G Verma, director rti, dopt.

Among the criteria for selection of the consultant was that the agency should have carried out such studies elsewhere. Although the firm has no such record, it qualified the financial and technical bids, indicating it has the means to conduct such a study. ngos had also competed for the tender, says a dopt official. "But their concept paper was very weak and they did not seem to have enough manpower to conduct the study," said another dopt official.

ngos are conducting their independent study under the banner rti Accountability and Assessment Group, which comprises organizations such as the Mazdoor Kisan Shakti Sangathan (mkss), ncpri, Devdungri, Rajasthan, National Campaign for People's Right to Information, Delhi, Nehru Memorial Museum and Library, Delhi, Tata Institute of Social Sciences, Mumbai and Centre for Studies of Developing Societies, Delhi. mkss was among the organizations that spearheaded the rti movement in the mid 1990s.

"Our study is not in response to the government's study but it just happened to have the same timing. The objectives of both studies are similar but methodologies are different. Given the government's track record, our suspicion is they will subtly try to weaken the act. Besides, the agency involved is an accounting firm, so we can't be sure of how much they will be able to find out at the village level," Singh told Down To Earth. 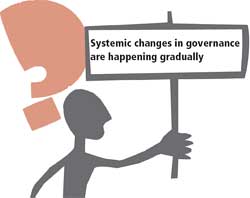 Their study will cover 10 states and finish by October. A national survey of 20,000 people will be conducted where villagers will be asked to frame rti applications on a subject and responses of public authorities concerned will be noted. Similar methodology will be followed in urban areas as well. Specific sectors such as media and institutions including high courts and the supreme court will be studied on how they have internalized rti. Public Information officers (pios) and chief information commissioners of states will also be interviewed.

"Systemic changes in governance are happening gradually. For instance, officials are scared if they do something under political pressure, they know they are answerable to the public. The enthusiasm for the act is there and it will go up. But there are certain issues of implementation that need to be addressed," said Singh. Appeals top the list and are among the major deterrents for people to use rti Act. Besides, these take time.

Only one case (of appeal) is cleared in a day in Andhra Pradesh and in Kerala, just 50 cases were disposed of in 2007, says Arvind Kejriwal of Parivartan, the ngo that used rti to expose public distribution system scam in Delhi. "Waiting time for appeals in Maharashtra and Uttar Pradesh is more than three years and in Delhi, it is up to a year. Information commissioners are killing the act.

They refuse to impose penalty on pios for delaying or giving out incomplete information," Kejriwal said. Information officers justify the backlog saying they don't have enough manpower or cite plain lack of incentive as one of the reasons (see box Our complaints).


Harinesh Pandya, who runs Janpath, an ngo in Ahmedabad that spreads awareness on rti, says there is a fundamental problem. "Half the load of rti applications will go down if proactive disclosure is made properly," he says. Proactive disclosure under section 4 of the act lays down that public authorities have to suo motu declare information pertaining to their functioning under various factors, which include budget allocations, welfare and subsidy schemes, inter-departmental transfers, details of committees, grants, permits and concessions.

Ideally, a person need not file an rti application for such information. "While announcing the act in the Lok Sabha, the prime minister had said that proactive information should be provided readily so that a person needs to use rti as less as possible. But this has not been taken in spirit by pios and hence offices are flooded with applications and appeals," says Pandya.

The following example is a case in point. In Jamnagar district in Gujarat, a person filed an rti application with the labour department in 2007 asking how many inspections on local manual labour employed by Reliance Petroleum factory was carried out in the past five years. The company is supposed to employ 80 per cent local manual labour as a part of conditions for getting tax benefits. But information was denied under section 8 of the act, which says it is not mandatory to provide information relating to commercial confidence or trade secrets, the disclosure of which would harm the competitive position of a third party, unless larger public interest is involved. The seeker, Rafeek Lal Maradia, received information after he filed the second appeal. When the information was granted, the company filed a case in the Gujarat High Court saying it was third party information and that the labour commissioner had given it without the company's permission. The court put a stay on providing third party information and told the seeker not to use the information provided. The case is pending still.

"This was proactive information which the labour department should have given even without an rti application but now every department is using this instance for not revealing details," says Pandya.

Surendra Srivastava of Lok Satta, an ngo in Mumbai, agrees "Any information that does not impact the legal personal interest of someone should not be denied to public. Disclosures on who was awarded the tender for road laying etc are denied often. It depends on the pio who feels that by the time the appeal is heard, he will either retire or get transferred," he said.

Proactive disclosure becomes all the more necessary because most citizens are still wary of government officers. They do not perceive getting information as their fundamental right. Janpath, along with state information commission and the Gujarat government, is doing a proactive disclosure audit of four public departments in each district of the state to find out what is lacking in their system and suggest additions in them.


Though there are problems, activists agree rti is a powerful regulation and has brought in significant changes in governance. Singh says government officers are careful because they know they can be booked under the rti act if they indulge in corrupt practices. He cites an instance where an officer refused to do the bidding of a retired secretary of his department. The secretary wanted him to allot a servant quarter but the officer did not oblige.

Ministers may have become careful about their travel bills after Maharashtra governor S M Krishna's travel details got exposed through an rti application. The disclosure revealed that the governor and his wife spent Rs 35 lakh on 31 trips between Mumbai and Bangalore from December 2004 to November 2006. All the trips were paid from the government exchequer. Visits included those undertaken for weddings, funerals, dance performances, a tennis association meeting and a volleyball championship. In an effort to give the regulation a boost, the Bihar government has introduced rti applications over phone for those who cannot write. "But," says Singh, "the rti Act has not been used to its potential and there is still a long way to go." For now, he hopes the country can wish the regulation a happy third birthday in October this year.