The start has been promising and exciting. Now the challenge is to sustain the ODF tag and ensure that the pollution is checked

This twin-pit toilet was constructed in May 2017 using concrete rings under SBM in Maithani block of Bihar's Begusarai district. Photo: Vikas Choudhary

Old habits die hard, they say. Despite getting a toilet constructed in their home two years ago under Swachh Bharat Mission (SBM), Harkesh, 56, and his 52-year-old wife Meena, of Kila Zafargarh village in Haryana’s Jind district, still go out for their morning ablutions.

When Down To Earth asked Meena why they do not use the toilet, she said rather shyly that defecating in the open is a force of habit. Harkesh’s parents, who are too old to venture out, are the only regular users.

In neighbouring Nidana village, 66-year-old Satbir said he has just one toilet for a family of 11. Consequently, some are forced to go to the fields to attend the call of nature in the morning as the toilet remains occupied.

In May 2017, DTE visited the district to find that in two gram panchayats, Barei and Pahadi Bujurg, 60 per cent of the residents had set up toilets under SBM and were keen on using them. But they squarely refused to use toilets during the dry season when the nearby canal dries up and they are left with no other source of water. This year, the situation is the same in Maharashtra’s Beed which faces a drought-like condition.

Such slippages and resistance to change are inevitable in this mega transition of India from a country of unsafe sanitation to an open-defecation free (ODF) nation. 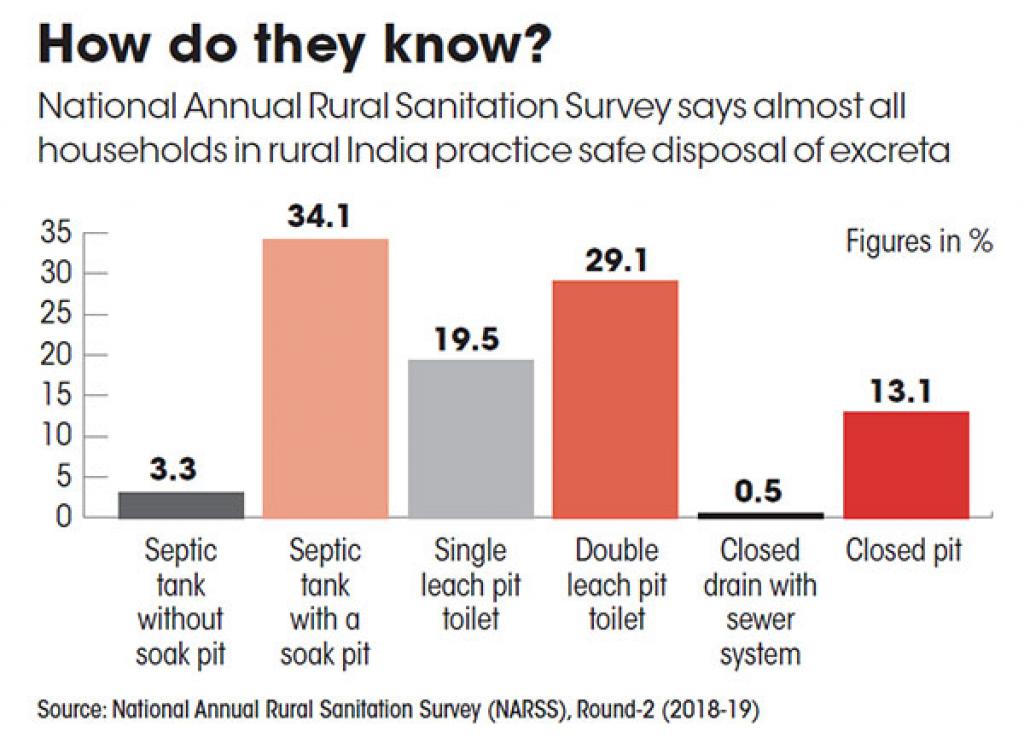 The scale of transition is so massive that this will mean new challenges. Between 2000 and 2014, open defecation decreased by some three percentage points a year, while between 2015 and 2019 it reduced at over 12 percentage points a year, says the 2019 report by the Joint Monitoring Programme (JMP) for water supply and sanitation by Unicef and who.

This extraordinary success of SBM will now have to stand the test of time. Will the over 100 million toilets built over the past five years be maintained and function? Will people continue to use them?

But what about safe disposal and management of human excreta, the other crucial pillar for sustaining the odf status? Has the government ensured this during its fast-paced drive?

Iyer tells DTE that the programme has taken care of this aspect as well. According to him, a majority of the toilets in rural India are twin pit leach pit type, specially built with two honeycombed pits dug into the ground.

In this system, the faecal material empties into one pit while the other remains shut. Because of the honey-comb design — using bricks for construction — the toilet is a self-contained treatment plant and does not require any additional blackwater or faecal sludge management.

The liquid leaches out of the pit and the pathogens die within a few feet of it, while the solid material remains inside. Once the first pit fills up in five to six years of continuous usage by a family, the faecal material is diverted to the second pit and the first pit is shut.

In about six months, the material in the first pit converts into pathogen-free organic manure which is safe to handle by hand and use for agriculture. Hence, there should be little concern on this issue of disposal of excreta from the toilets.

However, this position requires further scrutiny. The National Annual Rural Sanitation Survey (NARSS), the nationwide survey, funded and used by the government to establish SBM’s success, includes examination of the type of toilets being constructed and defines what is safe disposal of human excreta.

According to NARSS’ latest report, the bulk of toilets in rural India — 34 per cent — have septic tanks with a soak pit. Twin leach pit toilets are roughly 30 per cent.

The remaining are single pit and closed pit toilets. The problem is two-fold. First, the very definition used for safe disposal is erroneous as it is about the containment system (type of pit for holding the excreta) and not disposal of the excreta. narss defines safe disposal as toilets that have septic tanks with soak pit, single leach pit, double leach pits, closed drain with sewer system and closed pit. It does not examine how often or where the excreta is disposed—which can be a waterbody, vacant plots or farmland.

Second, the quality of construction is an issue even when it comes to building twin pit latrines with honeycomb for liquid waste disposal. In both well-constructed honeycomb pits and septic tanks, the liquid is discharged either into the ground or in drains and the solid (faecal sludge) is allowed to remain in the pit or tank till it is decomposed and is safe to use.

But this is dependent on construction quality. If the honeycomb pit or septic tank is not built to specifications, the waste will not decompose and when removed, it will have pathogens that will contaminate water and soil.

There is inadequate information about these aspects from government sources and therefore, remain a source of concern.

When DTE reporters travelled to different villages they found the toilet construction story to be a mixed one. In the Nilgiris, civil society says roughly 60 per cent of the households have single pit toilets due to space constraint.

"We now need a proper management plan for handling such high loads of undigested faecal sludge in this difficult terrain,” said Sampath Rajkumar of Rural Development Organisation. In Odisha, a rural water supply and sanitation official told dte that initially when sbm was launched, they used to follow honeycomb design but this has declined.

For instance, he said, in Deogarh, among the first to take up toilet construction under sbm, 30 per cent of toilets have honeycomb technology. But now, concrete rings have replaced bricks, and the percentage of such structures is much less in the other parts of the state, he adds.

A DTE reporter observed this when he visited villages in Balangir district — most had moved to building toilets using concrete rings which are cheaper and easier to instal as compared to brick-based honeycomb. He also found that people were extracting excreta from the pits (honeycomb or cement) and using it in the fields. There is no way to ascertain if the excreta had been fully decomposed and was safe to handle.

State officials from Karnataka also tell DTE that it is cheaper to build toilets with concrete rings than with bricks. This is the trend in several parts of the country as well. If these concrete rings are perforated, then the liquid waste gets discharged into the ground and the solid waste gets decomposed in the chamber.

However, it is not clear if this indeed is happening under the ground. It could well be that these are built similar to those in many peri-urban and urban areas where the tank is nothing but a concrete box, where decomposition is not possible. The only option then is to empty the box and take the faecal sludge for disposal to water or land.

WaterAid, an international organisation working on water and sanitation, conducted a rapid assessment in 2017 to study the quality and technologies used for toilet construction. This survey looked at 1,000 households in eight states, with 776 constructed toilets and 258 toilets under construction.

It found that the share of single pit latrines had increased sharply in the newer constructions, which, it said, “was a point of worry as single pits tend to present problems in terms of safety, sustainability and cost-effectiveness.” The survey pointed out that in newer constructions, the concrete rings were not perforated, and that the toilets were increasingly not using honeycomb brick structures.

In 2017, Vijeta Rao Bejjanki, a researcher on Community-Led Total Sanitation, conducted a rapid assessment of the state of knowledge on twin leach pit toilets. She found that village residents of Telangana and Andhra Pradesh preferred large single pits with several concrete rings or a septic tank, plastered on all sides without chambers. They said they would get the tank emptied whenever necessary.

The 2017 WaterAid report also studied the quality compliance of constructed toilets. It found that in many cases construction was suboptimal and not adhering to design parameters. It concluded that a third of the 776 constructed toilets were unsafe as they failed to guarantee the prevention of human contact with faecal matter.

In half of the constructed toilets, the stipulated 3 feet (0.91 m) distance between the twin pits was not maintained and this only increased in the under-construction toilets. This would lead to cross-contamination between the pits and negate the best features of twin pit toilets.

This survey is the only one that has some information, though limited, on emptying pits. It found that in 2017, the toilets were relatively new so only 2 per cent of the pits or tanks had ever filled up. In all cases the pits were manually emptied and bulk of the toilets’ faecal sludge was disposed of unsafely.

Surveys by Delhi non-profit Centre for Science and Environment (CSE) in peri-urban and urban areas show that most of the town planners or architects do not follow the Bureau of Indian Standards for the construction of septic tanks. As a result, in India, most septic tanks are built as simply single chamber tanks that act as nothing but a container of human excreta.

These tanks require periodic emptying, which is done through private contractors who then dump the septage either in open nullah (drain) or on vacant plots and fields. cse’s surveys in different cities, including those along the Ganga, found that such on-site systems are greatly contributing to pollution of waterbodies and land. The 2019 jmp report also flags the issue of safely managed sanitation services.

The survey says governments must define safely managed sanitation to go beyond the use of hygienic toilet and to include the safe management of excreta at each step of the sanitation trajectory—from containment to emptying to conveyance to treatment, and most importantly its reuse.

Clearly, in SBM 2.0 this is where the focus will need to be.