SC committee on toxic waste in midst of a storm 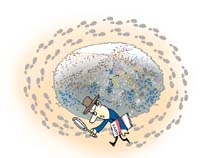 g thyagarajan, chairperson of Supreme Court's Monitoring Committee on Hazardous Waste Management (scmc), has asked the apex court to relieve him of his post. Declaring that "the work of the committee is over", he has turned in a voluminous final consolidated report.

The committee was created by a court order of October 14, 2003, in a petition filed by the Research Foundation for Science, Technology and Natural Resource Policy, an ngo in Delhi. It has been working as a standing committee since February 2002. The court reconstituted a committee of 11, nominating Claude Alvares, environmentalist from Goa, and D B Boralkar, member secretary to the Maharashtra Pollution Control Board. They did not sign the final report and are upset with Thyagarajan's comments. They are expected to submit a fresh report by the end of February 2007.

Initially, scmc's work was hailed by environmental groups. "It initiated some commendable moves like the constitution of local area environmental committees but it was hijacked within a year of its inception by the pollution control boards and the Union ministry of environment and forests (moef)," says Nityanand Jayaraman, a journalist and campaigner in Chennai, who is part of the Collective For Environment, Ecology and Social Justice. It is believed that the final report was drafted by Subba Rao, additional director, mo ef, and members of the Central Pollution Control Board (cpcb).
What the report says The report makes a list of "unfinished work". It says that its efforts have not been uniformly successful across the states and in relation to all tasks. It expresses concern over the lack of skilled manpower in the state pollution control boards (spcbs) and recommends their reconstitution. The report calls for at least one board head with "adequate scientific and technical qualifications".

From its recommendations, it is very clear that meeting the orders of the court and the committee will require considerable time. It has asked that cpcb should be given a year's time to draft and finalise the National Policy on the Management of Hazardous Waste. It has also asked for the same time frame to identify dumpsites and landfills and for framing rehabilitation plans. "A lot of work is yet to be done, particularly in the area of imports of hazardous waste and plugging of borders," says a committee member.

Ports dealing with imports have been given three years to upgrade their laboratory facilities for testing. But the committee does not appear to be strict in ensuring that these bodies meet their deadlines.
Targets not met The committee would have continued "till further orders" from the court. But Thyagarajan decided otherwise. "I wish to move on. The work of the committee is to give recommendations. It is the work of the respective spcbs to secure compliance," says Thyagarajan.

scmc was directed to submit quarterly reports to the court but it managed only five quarterly reports in three years. "Subba Rao dispensed with the trend," informs one of the members of the committee. However, Thyagarajan explains that "due to a variety of reasons further reports could not be filed in time. I, as chairperson, own responsibility". The minutes of the 17th meeting of the committee mention that Thyagarajan had to apologise to the court."cpcb officials felt threatened by the continuation of scmc. That is why they arranged for it to fold up," says Gopal Krishna, a Delhi-based researcher and member of the Indian Platform on Ship Breaking.

The committee's role in Tamil Nadu was questioned by activists. At the behest of scmc, the National Environmental Engineering Research Institute along with the Tamil Nadu pcb started work on a landfill at Gumudipoondi, a village rich in freshwater with a shallow water table. "The Madras High Court ordered a stay on the move, but then realised that an scmc order could not be revoked," says Jayaraman. "We have slipped back several years since this committee started legitimising illegalities." He gives the example of Sterlite Industries' plant at Tuticorin, saying it was producing hazardous waste and had no permission for being set up. But scmc, he says, has given it legitimacy by engaging with it.

The case of the Danish ship, Ricky, that had come to India for dismantling in 2006, is another case in point. "I was wholly unhappy with the Ricky affidavit filed on behalf of scmc. Others in scmc agreed with me. The affidavit was prepared by moef and Gujarat pollution control board, both of whom are respondents in the petition on hazardous wastes, and filed in the name of scmc. We thought our objections would be taken on board. They were not," said Alvares. The committee later opted out of the ship breaking case and a technical committee was constituted for the same.

Questions remain about scmc's true intent. 'Why did it create a committee to oversee the government's enforcing of hazardous waste rules, and let government officials themselves sit on it?" asks Krishna. The future of the committee will be decided in the first week of March 2007, when the case comes up for hearing.