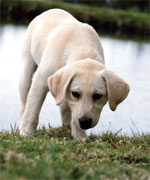 Dogs are a man’s best friend. And they have proved it again. Researchers have found that dogs can detect bowel cancer in humans using its sense of smell. They can sniff the cancer in breath and stool samples with a 98 per cent accuracy rate. It also indicates that there are specific discernible odours given off by cancer cells which circulate in the body. The researchers hope to develop a technology based on dogs’ sniffing power which can help in early detection of the disease. The experiment was conducted on Labrador retriever breed of dogs.
Gut, March

A fossil of an ancestor of modern cricket like insects shows the category has undergone little evolutionary change in 100 million years. The fossil of Schizodactylidae, splay-footed crickets, was found in north eastern Brazil. It differs little from the modern group of these carnivorous insects living in Asia, Indochina and Africa. The genus has been in evolutionary stasis since the time of the dinosaurs in the early Cretaceous period. This is a rare find and shows evolution is intelligent.

It does not change things until required. The insects belong to an unusual group of large, predatory insects like katydids and grasshoppers, in the order Orthoptera.
Zookeys, January 26 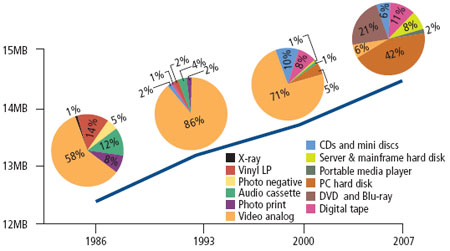 In 2002 the world began storing information digitally. Till then three-quarters of the information was in analog form. By 2007, all but six per cent had been stored digitally. This was revealed in the first study of the world’s technological capacity to store, communicate and compute information. It tracked 60 analog and digital technologies from 1986 to 2007. In 2007, we stored 2.9 × 1020 bytes, communicated 2 × 1021 bytes, and carried 6.4 × 1018 instructions per second. General computing grew at an annual rate of 58 per cent.
Science, February 10

Fed up of injections and shots? Here’s some good news. It has been found that salivary glands can act as a route through which vaccines can be administered. To make this advance, researchers studied two groups of mice. The first group was inoculated with live virus into their salivary glands and the other an inactive virus. The first group showed an increase in antibodies. The other had no immune response. When both the groups were exposed to the same virus later, only the mice immunised with an active virus had no infection.
FASEB Journal, January 27 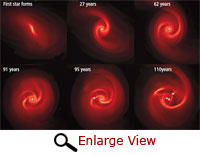 It was believed that early universe was a lonely place populated by huge but solitary stars. But a new study suggests the opposite. Astrophysicists used state-of-the-art computer simulations to model the birth of the first stars after the Big Bang. They demonstrated that the disk that surrounds primordial stars during their infancy can break up to form companion stars. So the stars were not lonely. The simulation sheds new light on the decade-long quest to understand the formation of the first stars.
Science, February 6 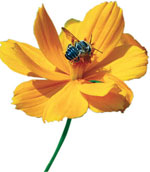 Collecting pollen is one of the most important tasks a bee does. Now biologists have shown that flowers use chemical defences to protect their pollen from bees. They secrete unfavourable chemicals which bees cannot withstand. Plants have a good reason to do so. Bees need enormous pollen to feed their young, which could be used for pollination. The pollen of several hundred flowers is needed to rear one single larvae. They also found that bees have physiological adaptation to survive on pollens of a certain flower. Denied pollen they die.
Functional Ecology, February 1 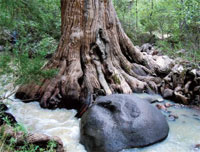 Using rings of a millennium old Montezuma bald cypress trees growing in Mexico, researchers have created a record of rainfall fluctuations in the region in the past 12 centuries. It is the longest and most accurate record for Mexico and Central America. It pins down four ancient megad roughts to their exact years. The 1,238-year-long tree-ring chronology provides an insight into the role droughts played in the rise and fall of pre-Hispanic civilisations. One drought thought to have affected US south west was shown to have also hit central Mexico between 1149 and 1167.
Geophysical Research Letters, February 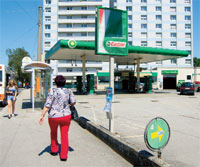 Happy that petrol pumps are next to your home? Here is something to worry. It has been found that if you live within a 100 metre radius of the petrol pump you are vulnerable to cancer because of high-level of pollution. The airborne chemicals come mostly from unburned fuel evaporating during refilling of the stations’ storage tanks, during automobile refuelling, and from spillage. The researchers suggested that housing should be a minimum of 50 metres from gas stations. Vulnerable places, like hospitals, retirement centers and schools, should be 100 metres away.
Journal of Environmental Management, December

Folic acid is known to prevent heart attack. But there was one thing which puzzled doctors. Why it failed to prevent the attack second time. This has been explained. Taking folic acid for the first time lowers homocysteine, which can damage arteries and cause blood clots. When such patients have heart attack for the second time they are already on drugs which perform the same role as the folic acid so there is no benefit.
PLOS One, February 2

Analysis of a comprehensive database has revealed strong links between biological productivity on the surface of oceans and patterns of biomass. The majority of the biological production in the world’s oceans occurs in the sunlit surface waters—photic zone. Seafloor biomass is the highest around the poles and on continental margins, where upwelling waters supply nutrients needed for phytoplankton growth in the photic zone. Values are also high near the equator where interaction of wind-driven currents causes upwelling. Low biomass was on the central plains of the ocean basins. The map provides insight into the functioning of deep-sea ecosystems and their role in the global carbon cycle. PLOS One, December 30