Scientists have discovered that dinosaurs were perhaps the first to be tormented by lice. A study of the insect’s DNA showed lice evolved more than 65 million years ago, at a time when dinosaurs still ruled the earth. It also suggests that mammals and birds began to diversify into the vast range of different species seen today, far earlier in prehistory, at least before the end of the Age of Dinosaurs.
Biology Letters, April 6

Traces of mercury found in albatross feathers up to 120 years old have helped scientists determine how much sea birds and global systems are being threatened by pollution. Researchers found that toxic levels of methylmercury—the metal’s poisonous organic form—in the sea bird have steadily increased since the onset of manmade mercury emissions.

They studied the feathers from blackfooted albatross specimens stored in two US museum collections between 1880 and 2002. The findings serve as a warning of the increasing mercury threat to the world.
PNAS, April 18 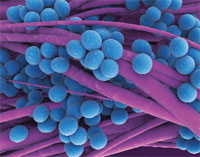 If India is haunted by superbug NDM-1, MRSA spells trouble across the world. Now the secrets of MRSA superbug’s resistance have been cracked. This can pave the way for new drugs to fight infections. It is known that antibiotics work by binding to a site inside a bacterium that pumps proteins essential for its survival. This interferes with protein production and the bugs die. Scientists found MRSA carry a gene, CFR, which stops antibiotics from attac hing to the site—and also allo ws it to keep pumping proteins.
Science, April 28

Prenatal exposure to organophosphate pesticides— used in food crops—can lower a child’s intelligence. A study has fou nd that for every tenfold increase in the pesticide level detected in pregnant women, there was a 5.5 point drop in her child’s IQ at age of seven. Children with the highest exposure sco red seven points lower on a standardised measure of intelligence compared with those who had the least exposure.
Environmental Health Perspectives, April 21

Although the planet is warming, events of extreme cold will persist on each continent for the next century. But they will be less frequent. Using nine global climate models and assuming moderate levels of greenhouse gas emissions, the researchers compared the climates of 1991-2000 with 2091- 2100. They also found that southeast and northwest of the US will be the most vulnerable to extreme cold. The analysis can help countries prepare to face extreme cold events apart from global warming.
Geophysical Research Letters, April 27 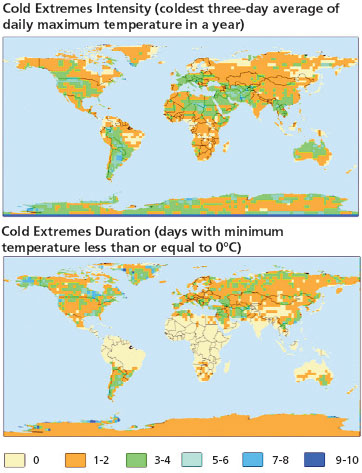 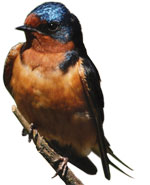 Not only does the colour of bird’s plumage protect it from ultraviolet rays and help in camouflage, it also shields it from nuclear radiation. Twenty-five years after history’s greatest nuclear accident took place in Ukrai nian city of Chernobyl, scientists studied the colouring pigment, melanin, in 97 bird species exposed to radiation. They found the birds with orange and brown plumage were more vulnerable to radiation because radiation diminishes formation of pigments responsible for these colours. Brown and orange colour is produced by pheomelanin, a type of melanin dependent on antioxidant glutathione for its formation. Glutathione is most susceptible to radiation.
Oecologia, April 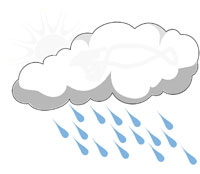 The influence of a warming climate on clouds—and the impact of clouds on climate—is one of the puzzles that has haunted the makers of climate models for years. To analyse this further researchers studied cumulus clouds and examined in detail the sunlight they were reflecting. These clouds can cause rains, hailstorms and tornadoes. They found that the clouds cast cooling sha dows irregularly over the land. Their bright white surfaces refle ct some sunlight back into the space, causing another cooling effect.

Turbulence from boat propellers can kill a large number of copepods—shrimp-like crustaceans about the size of a rice grain. They play an important role in marine food web by feeding on algae and other microscopic floating plants and moving energy up the food chain. To study the effect the scientists analysed two rivers and a bay with low, me d ium and high boat traffic. They measured the number of copepods before and after the boats passed. The increase in copepods death can affect water quality. The killed cop epods sink down, making additional organic material, available for bottom-dwelling organisms to eat. This can lead to development of localised low oxygen zones.
Journal of Experimental Marine Biology and Ecology, April 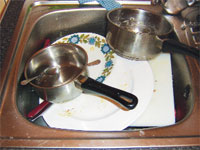 Next time you pour that cooking grease down the drain, think twice. Rese archers have found that fat, oil and grease (FOG) transform into hardened deposits of soaplike chemicals in sewer lines. The hardened deposits, which look like stalactites, then lead to sewer overflows. This can pose a serious environmental and health hazard.

Bacterial infections stink. And this could be the key to a fast diagnosis.

Each species of bacterium produces a unique blend of gases. Differing strains of the same species also have an aromatic fingerprint. Using a low-cost array of printed pigments, scientists have made a chemical sensor. It has 36 pigment dots that change colour as they sense chemicals in the air.
Journal of the American Chemical Society, April 27