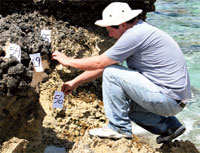 Sea levels in the past were considerably less stable than earlier believed. They changed up and down by four to six metres over a thousand years ago during a period called the Last Interglacial.

This new evidence of sea level oscillations during a warm period that started about 125,000 years ago is based on a recently deployed coral dating method. Scientists say since coral reefs grow near the sea surface, they are a more accurate marker of sea levels in the past than used methods. The study raises the possibility of a similar scenario if the recent warming trend continues. Nature Geoscience, September 11 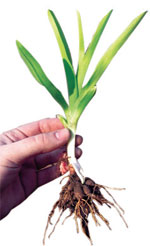 It is believed that there is less water in the soil where there are roots of plants. But now it has been found that soil in the vicinity of the roots contains more water. Plants also create a water reserve that helps them during short periods of drought.

The results were obtained from experiments carried out with the help of neutron tomography, a method that makes it possible to exactly show the distribution of water to a fraction of a millimetre, without removing a plant from the soil. The findings could help in breeding of plants to cope better during droughts. New Phytologist, September 15 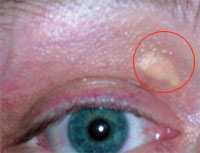 If you have yellow patches of skin (xanthelasmata) around the upper or lower eyelids do not ignore them. A study has found that they are signs of an individual’s increased risk of having a heart disease.

The study also concluded that white or grey rings around the cornea (arcus corneae) are not linked to the disease. Previous research had established that both xanthelasmata and arcus corneae are deposits of cholesterol. British Medical Journal, September 15 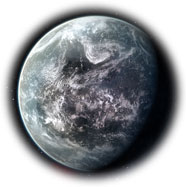 Astronomers have discovered more than 50 new planets outside the Solar System (exoplanets), including some with Earth-like qualities. It is for the first time that such a large number of planets have been found at one time.

The exoplanets include 16 super Earths—planets with a mass between one and 10 times that of Earth. While there are not any super Earths in our Solar System, scientists say they appear to be common around other stars.

One of the newly discovered planets, a super Earth, HD-85512-b, is located at the edge of the habitable zone—a narrow area around a star where water might be present in liquid form. Extreme Solar Systems II conference, September 16 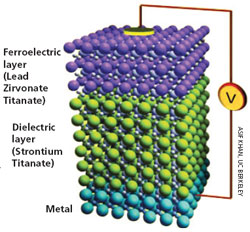 Scientists have found a way to cool down the high running temperatures of our computers. They have shown how minimum voltage required to store charge in a capacitor can be reduced by using ferroelectrics—a type of material that can hold both a positive and negative electrical charge without voltage applied to it.

This paves the way for ultra-low-power computing. For the experiment researchers first created a capacitor by marrying a ferroelectric material, lead zirconate titanate (PZT), with an insulating dielectric, strontium titanate (STO). They then applied voltage to the structure. As a control, they also applied voltage to a layer of sto alone.

By comparing the amount of charge stored in both devices, the researchers found a “two-fold voltage enhancement” in the charge from the ferroelectric structure. This makes possible to reduce minimum voltage necessary to store charge in a capacitor. This will help reduce energy consumption and heat generation of electronics. Advanced Materials, September 22

Lifestyle does affect a person’s vulnerability to hypertension, but researchers also say 30 per cent or more of the variation in hypertension risk is due to genetics. If risk genes differ then the treatment will also differ. Scientists tracked down DNA variations in 270,000 individuals. They found 16 new DNA variations associated with hypertension and validated 12 previously identified. They then coupled clinical records with genetic data and found that the variations may elevate BP by 4 mmHg. Nature, September 11

Every breath you take and drop you perspire when trapped after a disaster can help you survive. Scientists have devised sensors that sniff out metabolites, the gassy byproducts of food breakdown mechanisms, which are present in breath and sweat. For the study scientists over five days, in six-hour intervals, made eight participants enter a construction rubble.

They examined flumes of air to create a preliminary profile of molecules that could indicate human activity in a disaster zone. Sensors, rapidly detected carbon dioxide and ammonia through the rubble. Also a large number of volatile organic compounds like acetone were also detected. Journal of Breath Research, September 12 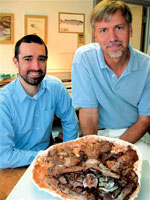 A large predatory fish once prowled North American waterways, suggests an analysis of its fossilised remains. The lobe-finned fish called Laccognathus embryi grew to 5 or 6 feet long and had a wide head with small eyes and robust jaws lined with large piercing teeth. It preyed on placoderms and lungfish. The team discovered the 375-million-year-old fossil in Arctic Canada.

It is the first North American species from a genus of extinct fishes previously found in Latvia and eastern Europe. Journal of Vertebrate Paleontology, September

Many people try crazy things to influence the sex of their unborn babies. However, researchers have determined that sex is controlled by a tightly regulated set of genes.

In fact, if those regulations are changed in any way, evolution kicks into high gear to make sure an organism ends up the sex it was destined to be.

The research was done on nematodes and used the variable of temperature to determine what kind of regulation was in place for sex determination. The findings showed that even with the change of temperature that stymied the controls, the organisms compensated in different ways to make sure they ended up the sex that was coded in the genes. Evolution, September 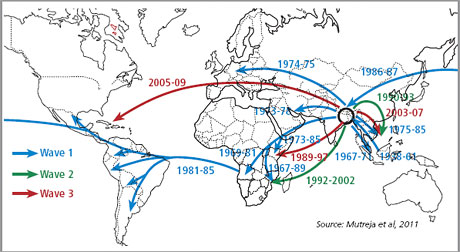 Bay of Bengal has been the epicentre of several distinct waves of global transmission of cholera. Scientists have found that the pandemic active since 1961 in Bay of Bengal reached Asia, Africa, Europe and the Americas in three distinct waves. For the study, the researchers sequenced the genome of 154 samples collected from patients around the world. Similarities were found between the genomes. They say it was spread by passengers on long-haul flights. Nature, August 24