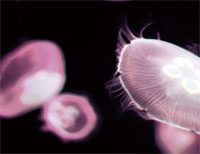 Jellyfish populations world over are exploding—and it’s not good news. In the first ever quantitative study, scientists found 62 per cent rise in jellyfish population in eastern Asia, the Black Sea, the Mediterranean, the Northeast US Continental Shelf, Hawaii and Antarctica. The team blames overfishing, pollution and global warming for the rise. The fewer the fish in the sea, the more the food for the jellfish. Overfishing may also mean that jellyfish have fewer predators. Generally, jellyfish are regarded as a nuisance—although in some places they are eaten—because they sting swimmers and interfere with fishing. About 40 people are killed by jellyfish every year as against eight by sharks. Hydrobiologia, April 18 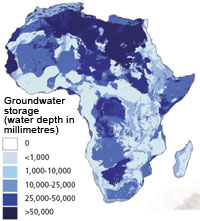 Africa is sitting on a vast reservoir of groundwater, a group of researchers has found. The total volume of groundwater in Africa is around 0.66 million km3—more than 100 times the available surface freshwater on the continent, where 300 million people do not have access to safe drinking water and only five per cent of arable land is irrigated.

The researchers say some of the largest deposits are in the driest areas of Africa, in and around the Sahara. The greatest groundwater storage is in northern Africa, in the large sedimentary basins in Libya, Algeria and Chad. The scientists collated their information from existing hydro-geological maps from national governments as well as 283 aquifer studies.
Environmental Research Letters, April 20

Six million migratory birds die each year in the US due to collision with communication towers, says a study. Some 84,000 murderous towers rise 600 metres. The birds are killed by getting caught in the cables that prop up the towers. During bad weather, cloud cover forces them to fly low. Replacing the steady-burning lights with blinking ones could cut mortality by 45 per cent. Scientists also recommend building freestanding towers to reduce the need for guy wires. PLoS ONE, April 25 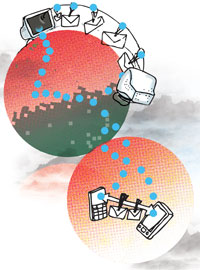 Multi-hop wireless networks are known for providing data access to large, unconventional spaces but they have a tight limit on how much data is transmitted. Now scientists have developed an approach that can boost the amount of transmitted data by 80 per cent.

The new approach uses an algorithm that instructs each node in the network on how much power to use for each transmission depending on its final destination. Computer Communications, April (online) 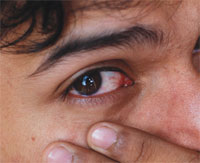 Dry and gritty eyes? Order a double espresso. Caffeine intake can increase the eye’s ability to produce tears, a finding that could improve the treatment of dry eye syndrome. Though the syndrome is often just an annoyance, it can threaten vision.

It is caused by a malfunction in the rate of tear production. In the study, all 78 participants produced more tears after consuming caffeine than after taking a placebo. Current treatment includes simple warm compresses and over-the-counter artificial tear solutions. Ophthalmology, April 17

In times of stress, lizard mothers give their developing embryos short shrift, but the hardship benefits babies later in life, say scientists. When in stress, like predator attacks, lizards release hormones that help them access stored energy. But for pregnant ones there is a trade-off: stress hormones rob energy from embryos.

The team studied stressed and non-stressed southern grass skinks. Stressed moms gave birth to smaller offspring compared to non-stressed ones. Both the types were in good physical shape. The benefit: small offspring have larger fat reserves relative to body size, enhancing survival during stress, explains the team. Physiological and Biochemical Zoology, May 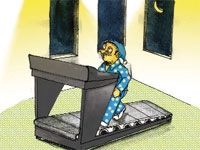 If your sleep patterns are out of whack, then there’s more to worry about than just under-eye dark circles. A study says sleeping for less than six hours a day can result in gaining five kilogrammes in a year and can put one at increased risk of diabetes. Over six weeks, researchers monitored 21 volunteers.

For three weeks, they were allowed 5.5 hours of sleep. Inadequate sleep affected secretion of the hormones ghrelin, which increases appetite, and leptin, which indicates when the body is satiated. The disturbance also raised blood sugar, because the pancreas stopped secreting enough insulin. The American Journal of Human Biology, April 11 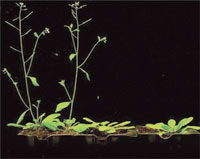 Scientists have identified a protein that triggers blooming in plants. It has been shown that plants are able to adjust the timing of flowering in response to environmental conditions, like light and temperature, but little was known about what exactly prompts plants to make flowers instead of leaves.

After scanning three million samples over five years, the scientists zeroed in on a protein essential for flowering under normal light conditions, which they named FTIP1.

They found that plants with non-functional FTIP1 genes flowered late under normal conditions , but when such plants were given functional FTIP1, their flowering times returned to normal. The protein can be used to increase crop yields, say the scientists. PLoS Biology, April 17

There’s a possibility the invisible dark matter that is said to make more than 80 per cent of the universe’s mass does not exist, at least not where a group of astronomers scoured. The team mapped motions of 400 stars up to 13,000 light-years from the Sun and found no evidence of the elusive substance. Dark matter shows itself by its gravitational attraction for the material, like stars and dust, around it. This substance was originally suggested to explain how galaxies formed and evolved. According to the researchers, the result does not mean that there is no dark matter; it is just that it is not where they looked. The Astrophysical Journal, May