Here’s another good reason why diesel should not be promoted as a car fuel. A study has found that babies in the womb exposed to diesel exhaust are more likely to become obese later in life. The risk is more for the male foetus. Two groups of pregnant mice were exposed to high levels of diesel exhaust and then fed with either a high fat or a low fat diet. It was observed that male offsprings of diesel-exposed mothers were fatter even if they were fed a low-fat diet. The study suggests that people who live in low income neighbourhoods and are exposed to higher levels of this obesity-causing substance or obesogen would be more at risk of becoming obese. The FASEB Journal, July 20 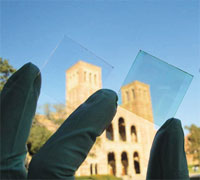 Solar panels do not need to be restricted to rooftops anymore. Scientists have created solar cells that are 70 per cent transparent and can be installed as window panes. These solar cells are formed of a near-infrared light-sensitive polymer over which a film of transparent silver nanowire composite is used. These new polymer solar cells generate energy by absorbing infrared light instead of visible light.The material is lightweight, flexible and can be produced in high volume with low cost nanoparticles. ACS Nano, July 12 (online) 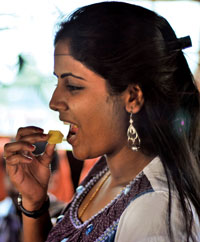 Till now it was considered that fat makes food taste better. But a new study shows that it just masks the taste of food. Fat in food deactivates certain regions of the brain that control taste, aroma, and sense of reward. Researchers fed a group of participants fruit emulsion containing different amounts of fats and studied their brain activity using an MRI scanner. The researchers found that areas of the brain responsible for flavour perception were significantly more activated when the participants tasted non-fatty sample as compared to the fatty ones. Researchers say the study can help develop less fatty products without negatively affecting their overall taste. Chemosensory Perception, July 1

TECHNOLOGY
Super-battery that runs on air 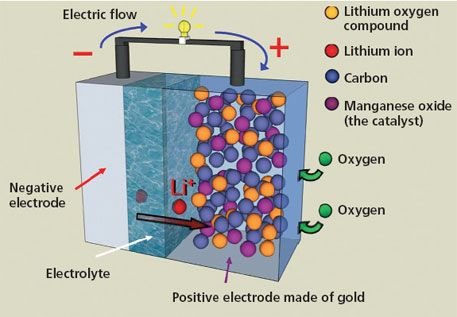 Scientists are a step closer to developing lithium-air battery that will last 10 times longer than lithium-ion batteries. The battery uses oxygen from the air for the chemical reactions that make batteries work. The biggest obstacle in the way of developing lithium-air battery was that oxygen reacts with battery components, causing them to degrade. Scientists have now used gold, instead of carbon, as the positive electrode, and dimethylsulfoxide, that is less likely to react with the oxygen, as electrolyte. The new combination worked and the battery was stable for 100 charge and discharge cycles. These batteries could one day allow users to talk for a week without charging their cell phone. Science, July 19 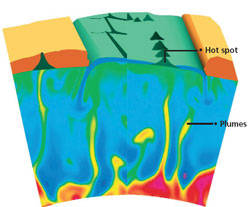 We all know that volcanoes are formed when continental plates move, allowing the magma to break through to the surface. But there also exist volcanic hot spots, like the Hawaiian Islands, that are not formed by shifting of tectonic plates. How these are formed has been a mystery till date. Scientists have now found that hot spots originate from mantle plumes generated in the Earth’s core-mantle boundary. Using the most brilliant beam of X-rays, they recreated the extreme conditions found 2,900 km beneath the Earth’s surface in the lab. They found that in such conditions rocks melt, become lighter and move towards the surface. They concluded that in a similar manner, gravity makes liquid rock at Earth’s core-mantle boundary move upwards and erupt in the form of a volcanic hot spot at the surface. Nature, July 19

HEALTH SCIENCES
When small is big

Liver cancer is the third leading cancer killer worldwide. Researchers have now found that loss of a small RNA molecule, microRNA-122, in liver cells leads to the deadly disease. When the molecule is missing, liver develops fat deposits and tumours that resemble hepatocellular carcinoma (HCC), the most common form of liver cancer. They believe that developing a drug to restore micro-RNA-122 levels to normal may help reduce the size and number of tumours by 20 per cent. Journal of Clinical Investigation, July 23

Plants can reduce pollutant concentrations at a much higher rate than previously thought. A study has found that trees can reduce levels of nitrogen dioxide (NO2) and microscopic particulate matter (PM)—two of the most worrisome air pollutants—in cities by eight times more than what was believed earlier. Till now, plants were thought to reduce pollutants in city streets by less than five per cent. Covering urban landscapes with grass, climbing ivy and other plants and trees can reduce the concentration of NO2 by nearly 40 per cent and PM by 60 per cent. Environmental Science & Technology, July 17

Researchers have found that radiations, like cosmic, gamma and X-rays, can cause 10 times more structural damage in electronic materials than was thought earlier. In space, electronic devices are constantly bombarded with cosmic radiation that can cause certain parts of these devices to fail. For the study, the researchers used a new characterisation method to peer through solid materials and pinpoint the radiation damage related to lattice of electrons in the atom. Earlier studies were limited to looking at defects in atomic lattice only. Journal of Applied Physics, July 9 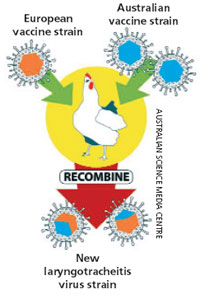 Till now it was considered highly unlikely that live viruses present in vaccines can recombine in the body to form new infectious viruses. But researchers have now found that two different virus strains—Australian and European—from infectious laryngotracheitis (ILT) vaccines have recombined to form two new strains in Australia.

They say that these new strains are responsible for most outbreaks of the respiratory disease in chickens in the past few years. The incident raises concerns about the safety of live virus vaccines like chicken-pox, polio and pentavalent vaccines. Science, July 13 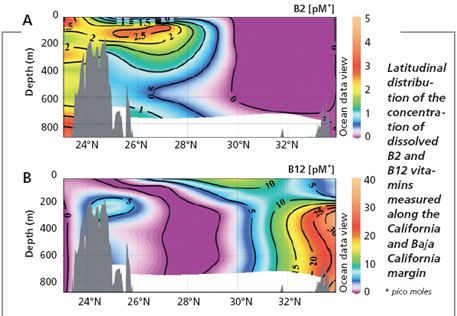 Not just humans, oceans, too, suffer from vitamin deficiency. Scientists have found that long-hypothesised vitamin B deficient zones actually exist in seas. They say that such marine zones with undetectable amounts of vitamin B, like riboflavin and thiamine, may reduce growth of phytoplankton. Phytoplankton are single-celled organisms that use energy from the Sun and act as the foundation of sea life. They found that at certain locations along the California (US)-Baja California (Mexico) margin of the North Pacific Ocean, vitamins B2 and B12 were found in nearly undetectable amounts. PNAS, July 23