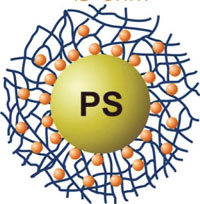 Titanium dioxide nanoparticles are found in everything from sunscreens to paints and toothpastes. However, current methods of their manufacture require costly chemicals and high temperature and pressure and produce unstable nanoparticles. This makes them difficult to transport, too. Now a method has been developed that can solve these problems. The new nanoreactor consists of a polystyrene core surrounded by a network of Poly N-isopropylacrylamide chains. When a titanium compound is added to the polymer, crystalline titanium dioxide nanoparticles are formed within the polymer matrix at room temperature. The matrix surrounds the nanoparticles completely and keeps them stable in crystalline form. Nano Letters, February 15 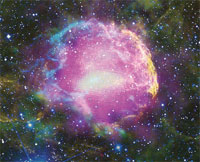 ASTROPHYSICS
Born in a supernova

Cosmic rays, composed of high-speed protons, constantly bombard our Earth. Their origin has remained a mystery until now because magnetic fields threading through the galaxy make them move in long, looping paths that make it impossible for detectors on Earth to trace where they’ve come from. Now it has been found that these incredibly fast-moving particles originate from dying stars. Using data on gamma-ray photons emitted by these cosmic rays, astronomers have shown that supernovas, the massive explosions that occur when a star dies, are the source of these particles. Science, February 15

Greenhouse gases, released by human activity into the atmosphere, are causing extreme weather events like killer heat waves, floods and storms by interfering with global air-flow patterns. Giant atmospheric waves blow at high altitude around Earth and keep the climate consistent by bringing warm air north from the tropics and cold air south from the Arctic. During recent extreme weather events these waves almost froze in their tracks for weeks due to the presence of greenhouse gases in the atmosphere. This made the extreme weather event persist and escalate for several days and months. PNAS, February 23

Groundwater near the surface of the earth is crucial for terrestrial ecosystems and helps maintain the flow of rivers and moisture in the soil during dry periods. But little is known about the global patterns of water table depth and where it provides vital support for land ecosystems. A map has now been developed to depict the depletion in groundwater due to modern climate, terrain, and sea level. It shows that between 22 and 32 per cent of the total land surface is influenced by a shallow water table, including approximately 15 per cent of surface water areas fed by groundwater, and between 7-17 per cent of groundwater areas accessible to the plant roots. Science, February 22 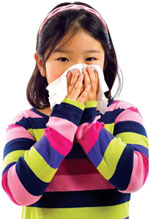 Want to keep the flu at bay? Kick up the humidity in your room. Survival of influenza virus is directly linked with absolute humidity. When absolute humidity is low—as in peak flu months of January and February—the virus survives longer and spreads faster from one person to another and vice versa.

A new filtering device can protect you from allergens, viruses and ultra-fine particulate matter in the air. Known as Soft X-ray Electrostatic Precipitator, the device uses soft X-rays to electrically charge airborne particles, which are subsequently drawn to an oppositely charged metallic collection plate and get destroyed there. Traditional air cleaners trap some airborne pathogens but are not very efficient at trapping those in the submicrometer and nanometre size range. The new device has overcome this limitation with the use of soft X-rays. Applied and Environmental Microbiology, February 15

DEET has been the most widely recommended insect repellent for the past 50 years. But mosquitoes are fast becoming immune to it. Previous studies have found mosquitoes with a genetic mutation that made them immune to DEET but what is being seen now is different. It has been found that even the mosquitoes that are initially sensitive to the chemical are able to ignore its smell within a few hours of exposure. This might be happening because the insects’ antennae became less chemically sensitive to DEET over time, just like people get used to smells they experience for long. PLoS ONE, February 27

Climate change is making sea levels rise. But because of the way oceans, land and ice interact, this change would not be even across the globe. As glaciers in Greenland, Antarctica and elsewhere continue to melt, by 2100 sea levels around the equator would rise up 150 per cent more than the rest of the world, while the sea levels will fall at the poles. The worst hit would be Western Australia and low-lying Pacific islands like Honolulu, Hawaii and Seychelles. Geophysical Research Letters, February 13 (online) 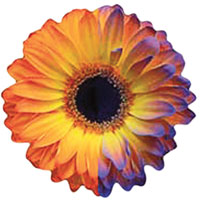 Not just colour, fragrance and shape, flowers also use electric field to attract pollinators. Bumblebees can sense this electric field and use it to recognise nectar-rich blooms. Plants are usually negatively charged and emit weak electric fields, while bees gain a positive charge as they fly through the air. Bee’s landing increases the flower’s electrical charge slightly for a short period of time. This change signals to the next bee that the flower has just been visited and its nectar has been depleted. How the bees detect the electric fields is not yet known but it may be that their hair bristle up under the electrostatic force. Science Express, February 21 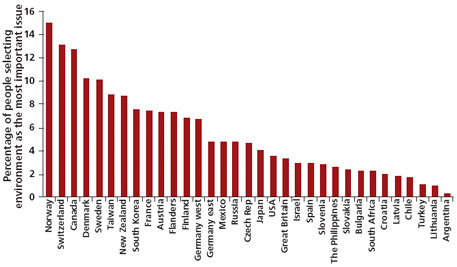 Concern for the environment has reached a 20-year low across the globe. An international survey in 33 countries from 1993 through 2010 suggests that most people consider economic problems a more serious issue than global warming. In the surveys, people were asked the relative importance of eight issues including healthcare, education, crime, environment, immigration, economy, terrorism and poverty. The environment did not make it to the top of the list in any country over the 17-year period, while the economy and healthcare ranked high on average among the countries included. Presented at “Policy Workshop: Public Attitudes and Environmental Policy in Canada and Europe, Canada-European Transatlantic Dialogue” in Ottawa, Canada, February 8