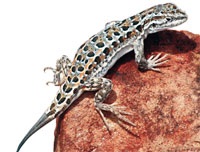 ECOLOGY
Heat is on

Global warming will make several species of lizards go extinct within the next 50 years. After the Ice Age, reptiles in colder areas developed several adaptations to succeed in these harsh places; giving birth to young ones (viviparity), as opposed to laying eggs (oviparity), was one. But if temperatures rise they will be unable to readapt to oviparity and would be disadvantaged ecologically and reproductively. This would eventually lead to their extinction. Global Ecology and Biogeography, March 5

ASTROPHYSICS
Star track
NASA’s Wide-field Infrared Survey Explorer has discovered the third-closest star system to the sun. Called WISE J1049-5319, it is 6.5 light years away from the sun and is the closest star system discovered since 1916. It consists of two brown dwarfs—stars that are too low in mass to ever become hot enough to start hydrogen fusion. As a result, they are very cool and dim and resemble a planet like Jupiter rather than a star like Sun. Since the star system is so close to Earth, it would be an excellent hunting ground for planets for the astronomers. Astrophysical Journal Letters, March 12

HEALTH SCIENCES
Bare truth
Barefoot five-finger running shoes are the latest fad. But a very quick transition to these minimalist shoes from regular trainers increases risk of injury to bones in foot. Whenever a bone is impacted by running or some other repetitive activity, it undergoes a remodelling process to adjust. People spend their life wearing a certain type of shoes and a sudden transition to minimalist ones does not give bone and muscles enough time to adjust to a different type of impact, leading to fractures. To minimise risk, runners should transition over a period of 10 weeks and start with low intensity exercise. Medicine & Science in Sports & Exercise, February 22

MICROBIOLOGY
Stress response
Normally bacteria do not absorb other bacterium’s DNA as they cannot discern if it is useful or safe. But sometimes they reproduce via DNA transfer. Why this happens has long been a mystery. Now a study has shown that it happens because bacteria become highly adhesive and motile during stress situations, like presence of antibiotics. This bumping around makes them take up more DNA by accident. Widespread antibiotic misuse is thus making bacteria take up more DNA and become drug-resistant. Archives of Microbiology, February 5 (online)

ENVIRONMENTAL SCIENCES
Chemical on menu
Phthalates, industrial chemicals present in plastics, shampoos and soaps have been found in over 72 samples of food products, including pizza, drinks and meat in the US. How they got into the food has not been found but packaging might be the culprit. Although the amount of phthalates in food samples was within safe limits it is still a concern as these toxins accumulate in the body and can impact the reproductive system and cause sperm damage, premature breast development in girls and premature birth. Environmental Health Perspectives, March 6 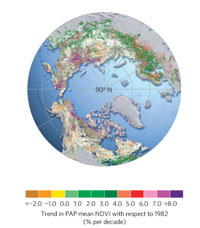 CLIMATE SCIENCES
Green Arctic?
Climate change is making land in the extreme northern latitudes greener and more like warmer habitats down south. Warming in the circumpolar area above the Canada-US border is
reducing the difference between summer and winter temperatures. This has made the growing season longer, making the plants cover 9 million sqkm in the formerly snow-covered
region. It now resembles the landscape found 400-700 km down south around 1982. These changes are leading to significant disruptions in various polar ecosystems. Nature Climate Change, March 10

TECHNOLOGY
Chip heals self
Here’s a computer chip that can repair itself when damaged. If an electronic circuit is damaged just a little bit, the entire chip is unusable. But equipped with sensors that monitor temperature, current, voltage and power, this chip works by rerouting data to different pathways instead of allowing failure of one pathway to shut down the whole system. Just like human immune system, this chip can identify a problem and issue a workaround. This could lead to smartphones that recover on their own from technical glitches from battery problems to total transistor failure. IEEE Transactions on Microwave Theory and Techniques, March 7 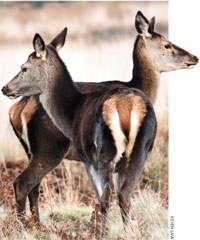 ZOOLOGY
Call for cull
Each year over 14,000 vehicles are damaged and about 450 people injured or killed on roads as a result of collisions with deer in the UK. At over 1.5 million, the country has the highest deer population today since the ice age and the numbers are increasing in absence of natural predators. A study has found that the population explosion can only be controlled by raising the cull rate from the current 20 per cent to 50 or 60 per cent. Without it, the animals would continue to devastate woodland and crops, cause road deaths and stray into urban areas. The Journal of Wildlife Management, March 7 (online) 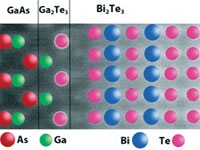 MATERIAL SCIENCES
Secret bond
Together, bismuth telluride and gallium arsenide are mainstay of modern day cooling devices for electronics. But how they are held together has been a mystery as their atomic structures are not compatible.

This means the two cannot react with each other, crossing out the possibility of a chemical bonding. It has now been found that the two are held together by weak electrical forces. Together, tellurium and gallium give rise to a one molecule thick gallium telluride layer. The attraction between electron-rich region on one side of the layer and electron-poor one on the other keeps the two materials together by weak van der Waals bonds. The find can lead to better cooling systems. Applied Physics Letters, March 5

FOOD SCIENCES
Killer bite
Think again before you reach out for a second helping of your favourite sausage. It has been found that daily intake of over 160 grams of processed meats, like sausages, ham, salami and bacon, increases the chances of premature death from cancer and cardiovascular diseases by 44 per cent. Three per cent of all such deaths can be attributed to the high consumption of processed meat. This is because processed meats are preserved by smoking, curing, salting or adding preservatives. During these processes, cancer-causing substances, such as nitrosamines, are formed in the meat. Such cured meats are also rich in cholesterol and saturated fats, which increase the risk of cardiovascular disease. BMC Medicine, March 7