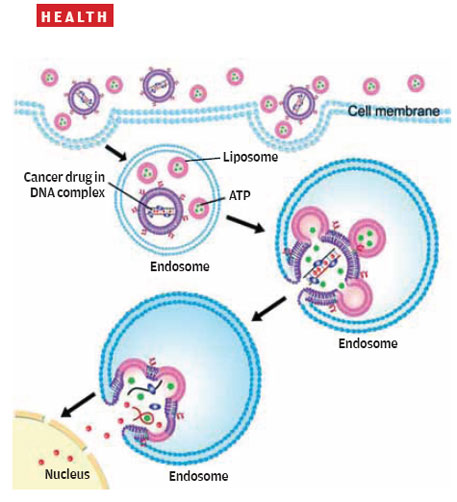 CANCER TREATMENT has serious side-effects because drugs, apart from attacking cancerous tissues, also expose non-target tissues to chemicals. To overcome this problem, researchers often look for methods to deliver the drug only to the affected areas. Now, liposomes, artificially prepared structures having lipid bilayers around them, are being tested for this. The therapy uses two sets of liposomes, one containing adenosine-5-triphosphate (ATP, or the energy molecule) and the other containing an anti-cancer drug embedded in a complex of DNA. The liposomes target the cancerous cells. Once absorbed into a cancer cell, the liposomes are sealed off from the rest of the cell in a special structure called endosome. In the acidic environment inside the endosome, the two types of liposomes fuse together and with the wall of the endosome. When the DNA molecules come into contact with ATP, they unfold using the energy from ATP and release the drug from its DNA cage in the cell, killing it. Angewandte Chemie, April 24

The RISE in infertility cases across the world has often been linked to chemicals used in everyday items such as textiles, drugs, food and personal-care products. But efforts to regulate the use of such chemicals, which disrupt the functioning of the endocrine gland, are hampered by lack of test to prove their deleterious effects. A new test shows that many of the chemicals adversely affect CatSper ion channel, a calcium channel in the sperm which controls its motility. Endocrine disrupters open CatSper, increase calcium levels in sperms and change their swimming behaviour. EMBOreports, May 12

Blueberry FARMERS can achieve better yields just by ensuring that the plant gets visited by different bee species. In North Carolina, US, it was found that exposure to each additional bee species resulted in an increase of $311 worth of yield per acre (or 0.4 hectare).

The benefit for each species was calculated to be $1.42 million worth of additional yield a year in the state. Bees can be attracted by planting native, flowering plants near blueberry fields. PLoS ONE, May 9

Phytoplanktons and zooplanktons are important parts of the marine food web. But rising ocean temperature is likely to reduce these food sources by 6 per cent and 11 per cent respectively by the end of the century. Rising water temperature may affect nutrient availability for these organisms. The impact would be more in tropical oceans, which cover 47 per cent of the global ocean surface. Global Change Biology Journal, May 7