'The talk of space wars, colonisation is still in the realm of fiction' 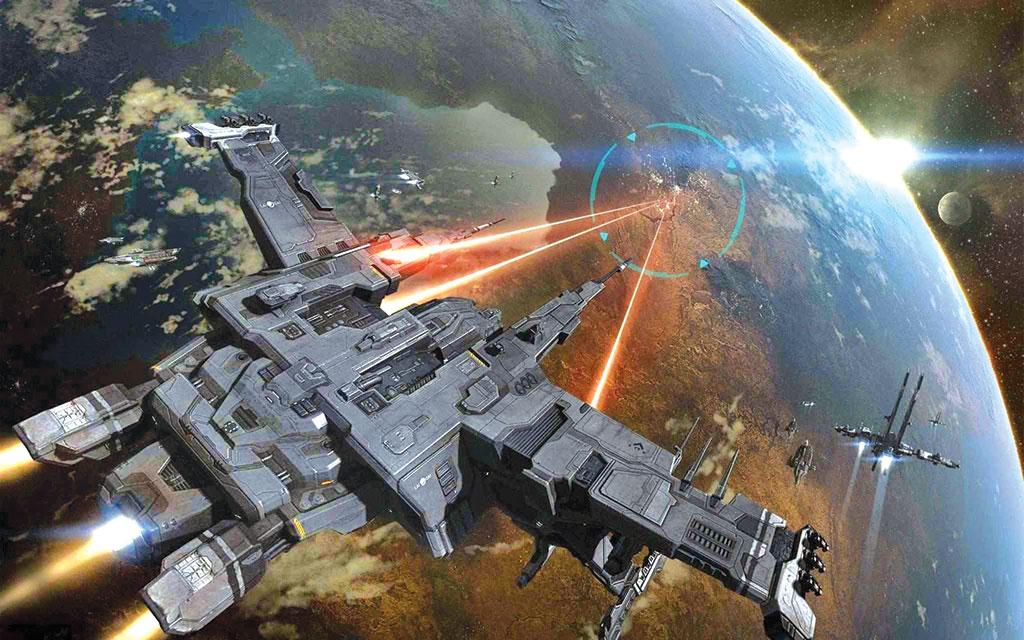 This June 18, US President Donald Trump announced the creation of a new arm of the US Military—the Space Force. Trump entangled the media in the absurdity of the name, while divu lging little on what the setting up this separate entity would entail.

Ominously enough, Trump’s anno uncement came during a meeting on space traffic management policy. The intention was first broached in March during a presidential address to the US Marines at a California base. “Space is a war-fighting domain, just like the land, air and sea… We may even have a Space Force… We have the Air Force, we’ll have the Space Force,” he remarked during the speech. “Our destiny beyond the Earth is not only a matter of national identity, but a matter of national security. When it comes to defending America, it is not enough to merely have an American presence in space. We must have American dominance in space,” exclaimed Trump in June. This is a dangerous divergence from historical and legal conventions that consider space as a global common for peaceful purposes.

Weaponisation of space has long seemed inevitable. The possibility has existed ever since satellite technology was first developed, over 60 years ago. During the Cold War, in the 1950s, both the US and the erstwhile Union of Soviet Socialist Republics (USSR) worked frantically to out-weapon each other in space. Anxious of attacks by the Soviets raining down from the orbits, the US began testing anti-satellite technologies, even testing the effectiveness of nuclear bombs in space before coming to an agreement with the USSR to limit the military use of space. As fears mounted, a UN brokered Outer Space Treaty (OST) was signed between the UK, US and USSR in 1967. Since then, membership has swollen to 106 nations and the treaty has served as the bedrock for all attempts to regulate the use of outer space, generally considered to be everything over 100 km above the Earth’s surface.

The mainstay against the use of space for warfare in the broadly delineated agreement was that, “States shall not place nuclear weapons or other weapons of mass destruction in orbits or on celestial bodies (including the moon and asteroids) or station them in outer space in any other manner.” However, the text was crafted in a way that it did not cast out the possibility of militarisation. This has long been recognised but rather than plugging them, the loopholes have been tacitly accepted by the world and exploited over the years.

The centrality of space in military strategy was cemented in the 1980s through the Strategic Defence Initiative heralded by the then US President Ronald Regan. Although OST and the slew of other UN-backed agreements and resolutions—and there are six such agreements and over 30 resolutions—prohibit the placement of weapons of mass destruction in space, there is no such restriction on its usage as a medium to carry missiles with explosive and nuclear payloads. The development of Inter-Continental Ballistic Missile (ICBM) technology, which can reach beyond an altitude of 2,000 km, in the second half of the 20th century further weakened the resolve to exclusively use space for peaceful purposes. Interestingly, in 2001 the US withdrew from a 1972 agreement with the then USSR (now Russia) to limit anti-ballistic missile technology which could include high-altitude interceptions. “With anti-ballistic missiles (ABMS), weaponisation of space has already begun. Beyond this, it is unlikely that there will be any agreement to deweaponise space. It can only expand,” says Ajey Lele, a senior fellow at the Institute for Defence Studies and Analysis, New Delhi. Over the past decades, ABMS have become indispensable to US military strategy.

The world has drastically changed since OST was first signed. No longer is space the exclusive domain with a handful of international players. Rather it has emerged as a crowded arena supporting a plethora of interests. According to the UN, there are over 60 countries that have deployed 4,635 satellites (including nearly 3,000 that are not functional) in Earth’s orbit, for a variety of commercial, research and military purposes.

Military applications of satellites have been expanding. According to a database of satellites prepared by the Union of Concerned Scientists (UCS), a US-based non-governmental body, 227 of the 360-odd military satellites currently in orbit have been deployed after 2005 and are owned by 22 different nations. Strikingly, China has 58 military satellites in orbit, all of which have been placed after 2004. The US in 2015, under Barack Obama, even made it legal for private companies to mine asteroids. In the last decade, several countries have come out with legislation regarding exploration and exploitation of space. The Indian Space Research Organisation (ISRO) has also put out a draft Space Activities Bill 2017 for public comments. 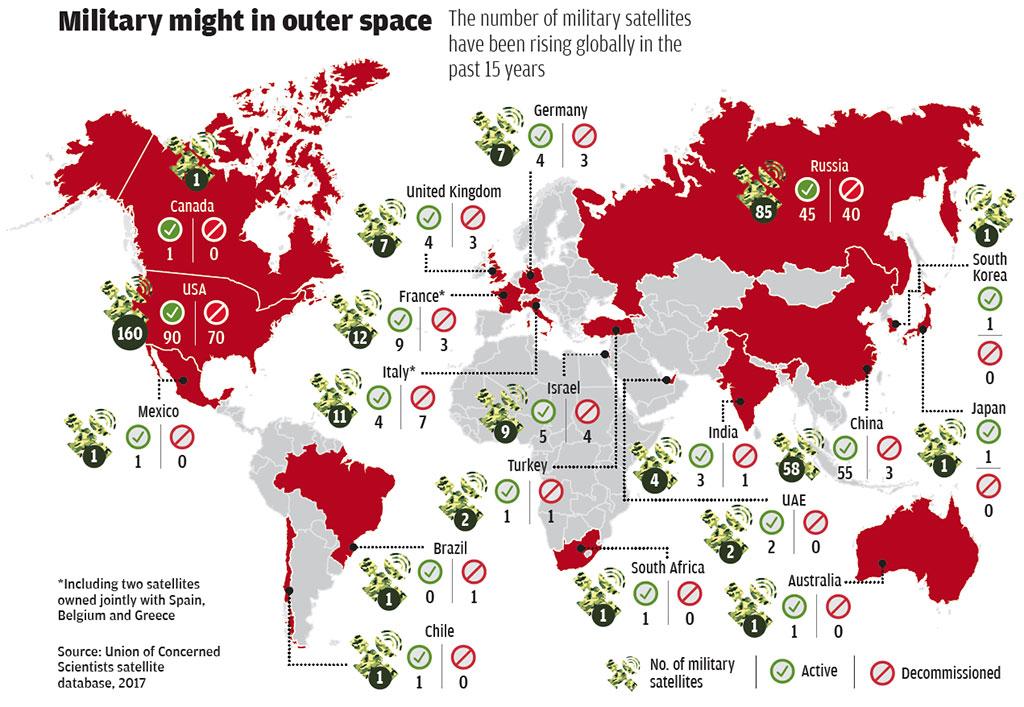 With military satellites crowding space, there is fast emergence of anti-satellite warfare. These tools and skills had been solely in possession of the former Cold War opponents. But in recent years other nations, particularly China, have started finding success. India too has reportedly been developing anti-satellite technologies as a wartime contingency. India has had all the basic blocks to build such a system since 2010. Last year, it tested indigenously made ABM which could be used for anti-satellite operations.

The US has also rapidly enhanced its military capabilities in space. In 1996, then Commander-in-Chief of the US Space Command, Joseph W Ashy said in an interview, “It’s politically sensitive, but it’s going to happen... We’re going to fight from space and we’re going to fight into space. We will engage terrestrial targets someday—ships, airplanes, land targets—from space.”

The last two decades have been an assertion of this vision. Successive US presidents, from Regan to Obama, funded space-based military applications to the tune of billions of dollars, with little public debate. In its latest budget, US Air Force has boosted space spending by $7 billion over the next five years, taking the total close to $50 billion annually.

By early 2000s, the US had begun expressing discontent with international negotiations. In a UN General Assembly vote on preventing an arms race in space in November 2000, the US was one of just three abstentions against 163 nations that voted in favo ur. Since then US, along with Israel, has deployed an increasingly contrarian stance in talks. In 2014, the US and Israel were among the four countries that voted against the adoption of a Russian draft resolution on banning an arms race in outer space in the UN General Assembly. A non-binding treaty for the prevention of an arms race in outer space is being discussed.

A 2006 draft of the US National Space Policy clearly formulated the opposition to arms control and aspiration to dominate in space. “Space superiority is not our birthright, but it is our destiny. Space supremacy is our vision for the future,” General Lance Lord, then head of US Air Force Space Command said in 2005. Notwith-standing the eerie similarity in Trump’s latest announcements, the creation of a Space Force is just the latest step towards America’s long-term vision to fully weaponise space. This does not automatically mean space wars or colonisation, says Lele. “The talk of space wars and colonisation is still in the realm of fiction. There are many shared interests for things to become adversarial. Also there is still a technological deficit for this to happen.”

Nevertheless, the announcement has alarmed other nations pushing for prevention of an arms race in space. The success of internati onal pressure remains to be seen.

Russia has submitted a working paper to resolve the ambiguities in interpretation and reaffirm the basic legal principles related to safety and security in outer space. The question now is how big is the leap from weaponisation to colonisation?

(This article was first published in the 16-31 July issue of Down To Earth under the headline 'Gearing up for space wars').