Silver nanoparticles caged in aluminium can rid water of arsenic 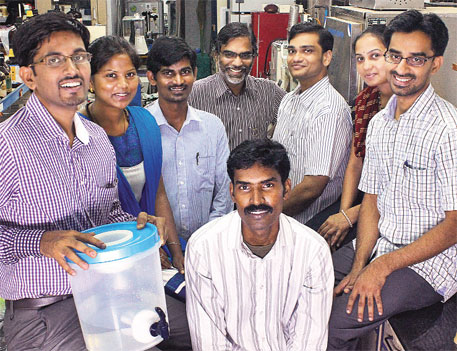 DESPITE an abundance of water filters in the market, access to safe drinking water remains a challenge for India and other developing countries. According to WHO, “Every year there are 2 million diarrhoeal deaths related to unsafe water, sanitation, and hygiene. The vast majority of them are children under five.” IIT Chennai researchers have invented a cheap water filter, which they claim could be helpful in achieving the United Nati ons millennium development goal of sustainable access to safe drinking water.

The filter, described in PNAS on May 6, uses nanomaterial to remove diseasecausing microorganisms and toxic heavy metals from water. It works by constantly releasing silver ions, which are an effective disinfectant, into the water. Several silver-based anti-microbial devices have been designed in the past but have not been viable. One of the reasons being presence of organic and inorganic impurities in water that cling onto nanoparticle surface and hamper sustained release of silver, say the researchers.

To find a way around this technical constraint, the researchers formulated a cage-like nano-composite of aluminium oxyhydroxide–chitosan with silver particles embedded in it. This composite ensures sustained release of silver ions into the water in an amount significantly less than the permissible limit set by the US Environment Protection Agency (EPA). This eliminates a need for secondary filtrations to remove excess silver ions, say the researchers. Silver nanoparticles remain intact as the aluminium cage reduces their contact with chemicals that might anchor on them. “What we have is a complete purifier. This takes care of all contaminants in water—microbial, heavy metal, organics. All of this is done with advanced materials. There is no solution of this kind anywhere,” says T Pradeep, corresponding author of the study. “The device is efficient in the sense that it provides clean water as per EPA standards. It costs just 6-7 paise/litre for microbially as well as chemically safe water.”

However, Ashok Gadgil, division director and faculty senior scientist at Environmental Energy Technologies Division of Lawrence Berkeley National Laboratory in the US says, “The arsenic removal in the PNAS paper was reportedly tested in arsenic-spiked tap-water. In our experience, Indian tap water has pretty low phosphate ion concentration. However, these ions appear in high concentrations in groundwater and compete for the same sites that are intended to capture and remove arsenic.” So, the performance and affordability of the system for removing arsenic from real groundwater would be different from that with spiked tap-water, and those results are not presented in the paper.

Another issue left unexplored in the study is the fate of the arsenic-laden sludge formed after rem oving arsenic from water, adds Gadgil.