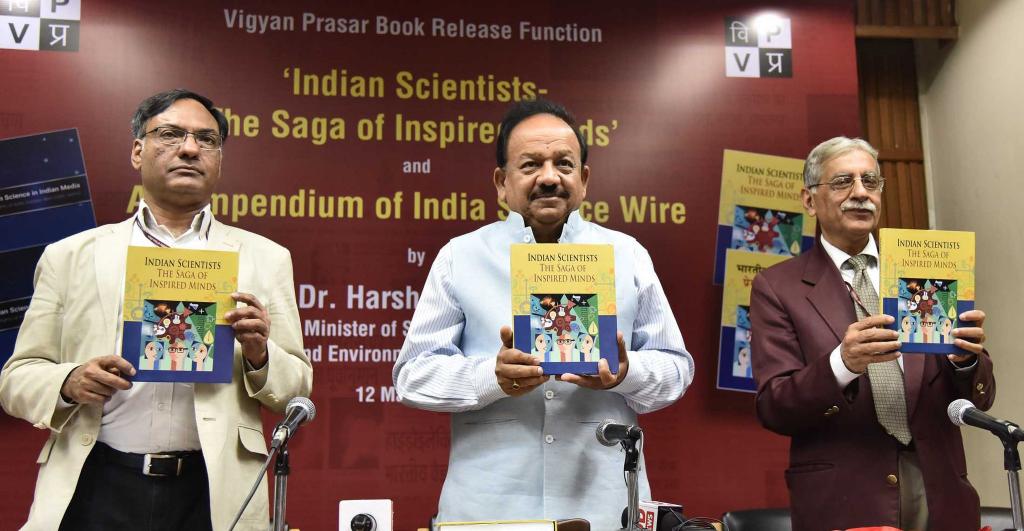 Greatest of advances, discoveries, inventions and innovations in science rarely follow a linear logic. A number of scientists and technologists in several spheres have beautified the landscape of science and technology-led development in India. These people personified excellence along with dedication and wisdom.

What was their moment of inspiration? What made them achieve what they did?

A new book, Indian Scientists: The Saga of Inspired Minds, released on Monday seeks to reveal important facets of development of science and technology from the perspective of inspiration and tenacity of purpose demonstrated by 54 of the top scientific minds of the past. The book, published by Vigyan Prasar, was formally released by Minister for Science and Technology Dr Harsh Vardhan. Family members and associates of a few of the scientists featured in the book were also present in the function.

While releasing the book, Dr Harsh Vardhan said he would request Ministry for Human Resource Development to include the book in school curriculum or ensure that it was made available to students all over the country.

“The lives of the scientists figuring in the book are glowing examples of triumph over adversity which will enthuse Indian youth who aspire to embark on the path painstakingly laid by them. Citizens from all walks of life, too, will be inspired by the leadership and vision of the scientists covered in this publication, for inclusive development,” the minister said.

“This publication also serves a very important purpose of science communication. It is designed to create awareness about the wealth of insights on the forms and functions of science and technology as tools for inclusive growth”, he added while reading out a few passages from the book.

On this occasion, the minister also released a compendium of science news articles syndicated by India Science Wire (ISW) during 2017. The compendium included 425 original news stories in English and Hindi produced by India Science Wire and published in Indian media outlets. These news articles highlight some of research work done in Indian research laboratories, academic institutions and universities. Another compendium of research highlights of winners of Ramanujam Fellowship awarded by the Department of Science and Technology was also released.