On september 15 this year, the Cassini probe, beamed its final images back to earth from over a billion kilometres away. nasa scientists arranged for a fittingly poetic end to the Saturn mission as the probe dove into the object of its occupation for over two decades. Plunging down at a speed close to 125,000 km/hr, the spacecraft burned up and became one with the big planet.

Almost 20 years ago on October 15, 1997, scientists from nasa, esa and the Italian Space Agency, together embarked on a mission to study Saturn, the farthest planet visible to the naked eye in our solar system. It was the farthest humans had ever inserted a probe into the solar system. Until then, scientists had only managed glimpses captured by nasa’s Voyager spacecrafts on their way to the outer solar system. The Cassini mission, named after the 17th century Italian astro-nomer Giovanni Cassini who had disco-vered the divisions in Saturn’s rings and four of its moons, was planned to orbit Saturn and study in close detail its rings and the condi-tion of its many moons. To give you an idea of how much has changed in our understanding of the planet in the last two decades consider this—when Cassini was launched, fewer than 20 of the 62 currently known moons of Saturn had been discovered.

Cassini will undoubtedly remain etched in memory for the more than 450,000 photographs that it beamed back in its lifetime allowing humanity a closer glimpse at the surrealism of our cosmos. But the probe also carried 12 high-tech instruments including spectrometers, spectrographs, magnetometers and dust analysers which have helped almost completely overhaul scientists’ understanding of the sixth planet in our solar system. Arriving at Saturn’s doorstep in 2004 Cassini showed us the famed rings of Saturn in mesmerising detail, revealing for the first time that the bands in fact ran into millions in number rather than the thousands estimated by scientists then. Over the years, Cassini gave us a window, constantly supplying information into how these rings were diverse, dynamically changing and reacting; acting much like Saturn’s own mini solar system.

The proximity offered by Cassini allowed scientists to learn about formative processes in ever closer detail—how objects clump together or break apart. Ripples in rings offered scientists a line of sight into the history of impacts and “propeller” features which show similarities to the processes of planetary formation. The hope is that this shall make way for insights into the way galaxies and solar systems are formed.

In its 13 years orbiting Saturn, the bus-sized probe examined 19 of its moons and revealed an astonishing variety ranging from the massive, hazy Titan to the pockmarked sponge-like Hyperion. Perhaps one of the biggest mysteries solved by Cassini is the case of Saturn’s dual-toned moon Lapetus. Observations showed that Lapetus’s ªyin-yangº appearance was owing to the depo-sition of fine dark dust by another of Saturn’s moons—Phoebe (which is believed to be an object from the fringes of the solar system captured by Saturn’s gravitation long ago).

In 2010, the probe watched closely as a storm formed on the surface of Saturn. Over the course of several months, the storm stretched over 0.3 million km with no landmass to intervene and halt the progress. The storm was ultimately stopped in its tracks by its own tail.

As the search for extraterrestrial life rumbles on, Cassini’s observations from two moons, Titan and Enceladus, have captured astro-scientists’ imagination. 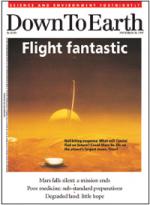 Titan was one of the primary targets of the mission when it was planned. Little was known about Saturn’s biggest moon at the time beyond the fact that it possessed an atmosphere. In December 2004, the Cassini spacecraft launched the Huygens lander (a European probe piggy-backing on the Cassini) onto the surface of Titan. It landed on the surface in January 2005. In the 72 minutes that the Huygens continued to beam information after landing, Titan’s surface was found to be incredibly earth-like; complete with rocks and  geological features like mountains and canyons carved by liquid methane. Cassini, using infrared cameras, showed a carbon-rich landscape full of dunes and mounds sculpted by winds. Through over 127 fly-bys, Cassini watched on as Titan’s meteorological cycles played out. Feathery methane clouds formed, floated and erupted in liquid methane precipitation much like our own hydro-logical cycle on earth. In fact, the climatic cycles on Titan have been likened to a possible analog for future earth. Cassini found organic molecules known to be pre-cursors of complex organic molecules which form the building blocks of life in the upper atmosphere of the moon. Scientists believe that Titan might provide the best stage to study organic chemistry that evolved into life on earth some 8 billion years ago.

When the mission was kicked off, scientists assumed that Enceladus was too small to generate and retain heat for the existence of liquid water. Enceladus was assumed to be an icy, dead moon. In 2006, after studying high resolution images, scientists announced the evidence of the possibility of water geysers spewing liquid water on Enceladus. In the years that followed, the Cassini mission revealed intense geologic activity near the moon’s unexpectedly warm south pole, the presence of a subsurface ocean complete with salts, simple organic molecules and possibly even hydrothermal vents, much like we have on earth. From an icy, dead satellite, the 500 km-wide moon is now considered to be one of the most promising places in our solar system for extraterrestrial life.

In 2010, it was decided that the mission would be extended a second time, this time until fuel ran out. And so even in its final descent, the Cassini probe manoeuvred between Saturn and its rings 22 times before taking the ultimate “bittersweet” death dive with about 1 per cent of fuel remaining. The entire mission that lasted for two decades involved three space agencies, hardware from 19 and investigations from 26 nations. Around 80 minutes after its final signals flickered to death on screen, Cassini’s final message to earth reached its destination— an image of the mystical dual-tone Lapetus.

The Cassini-Huygens mission wasn’t just one-of-its-kind scientifically speaking, it was also a testament to the distance humanity can traverse with scientific cooperation—perhaps a timely reminder for an increasingly-isolated world.