The key equipment in the facility include a whole body radiation counter, storage system for containment of radioactive waste and provision for preliminary decontamination of the affected areas.

Whole body radiation counters are generally large and expensive devices consisting of massive high density radiation shields and sophisticated instrumentation. The new facility helps to avoid the handicap and at the same time provide a quick assessment of the nature of the radiation contamination and its extent. The facility offers the possibility of containerised transportation by any mode, while providing high resolution analysis of the contaminants. 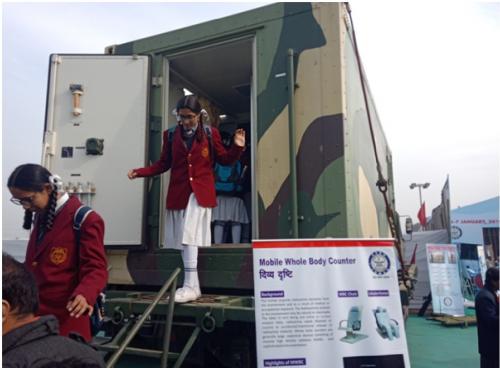 A truck-mounted prototype was on display at the 'Pride of India' expo set up as part of the 106th session of the Indian Science Congress, which is underway here at Lovely Professional University. It was one of the major attractions at the expo, with children and adults, who are attending the conference, making a beeline and clambering up a steel ladder put up at the rear of the truck to have a glimpse of the facility.

Speaking to India Science Wire, Director General (Life Sciences), DRDO, Dr. A.K.Singh,said it takes just about 15 minutes to measure the radioactivity concentration per person and is a field-compatible standalone system.

The DRDO, he said, was also working, among other things, on developing low-cost polyhouses to help improve crop quality and productivity in border and other remote areas as part of an exercise to provide better supply of fresh vegetables, fruits and other food articles for army and paramilitary forces deployed in those areas, besides improving the socio-economic condition of the local population,

"Polyhouses cost about Rs 2-3 lakhs and are based on aluminium and other materials. Our aim is to use bamboo and other locally available material and bring down the costs to Rs 25,000-30,000. We are working to develop polyhouses of different sizes to cater to needs at individual, family and community levels," he added.

Noting that the main agenda of the life sciences division of DRDO was to develop life support technologies to improve combat efficiency, he said DRDO scientists have designed a state of the art backpack with a capacity of 90 kg with a facility to even stow away a rifle. “Indo-Tibetan Border Force has tried it out and they were happy with it”.

Among other things, special types of gauzes and gels have been developed to handle bleeding injuries better and have been tested out by the All India Institute of Medical Sciences “Our goal is to enhance health and well-being of the soldiers even in extremes of environmental and operational conditions, strengthen man-machine interface through human factors engineering, and boost the moral and motivation of troops”.

Asked about the problems that have been found with regards to the biodigesters that were developed by DRDO and were used by railways and other agencies, he said that corrective measures are being taken. "The problem was not with the technology. It had to do with their implementation. For instance, the working of the biodigesters depended upon the kind of bacterial cultures that were used and their quantity. The norms were not been followed properly. In many cases, there was overloading of the system. We are in touch with user agencies to ensure that correct procedures are followed," he said. (India Science Wire)