Glycogen in neurons of degenerating brains is beneficial: study 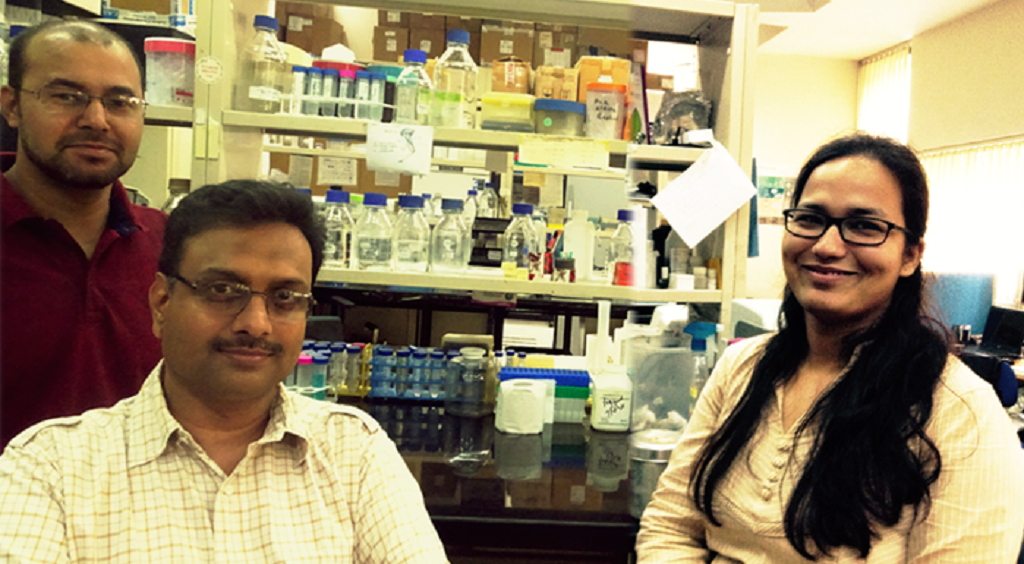 Subramaniam Ganesh of Indian Institute of Technology, Kanpur with his team. Credit:Author

Healthy neurons do not store glycogen - the main source of energy storage for cells - while they do possess the machinery for glycogen synthesis in an inactive state. At the same time, neurons in degenerating brains are known to accumulate glycogen. A team of Indian scientists has figured out that glycogen in neurons actually has a protective role in patients with neurodegenerative disorders like Alzheimer's and Huntington's.

Glycogen synthetic machinery in healthy neurons usually remains in an inactive state. In this machinery,an enzyme called glycogen synthasecatalyses the formation of glycogen. Using cellular and animal models of Huntington’s disease, the researchers have shown that high level of cytotoxic mutant Huntingtin protein triggers more glycogen synthesis in neurons by activating glycogen synthase. They observed that increased level of glycogen synthase protects neurons from the cytotoxicity of the mutant Huntingtin protein.For long, scientists have been trying to find specific role of glycogen in neurons, especially in brain diseases like Huntington’s, Lafora, Alzheimer’s etc. with some believing it be neurotoxic. The new study led by Subramaniam Ganesh of Indian Institute of Technology, Kanpur (IIT-K) suggests that glycogen has a protective role in neurons of patients suffering with neurodegenerative disorders.

“Our findings establish that glycogen synthase is required for neurons to survive during stress. We also show that glycogen thus synthesised prevents aggregation of abnormal proteins, and helps in their clearance. These findings might open up new avenues of therapeutic interventions,” explained Ganesh.

“It is an important finding on protective role of glycogen synthase in neurodegenerative diseases which may have translational relevance,” commented Professor Sathees C Raghavan from Indian Institute of Science, who is not connected with this study.

“These findings may open exciting possibilities for developing new therapeutic approaches for the neurodegenerative diseases which are becoming serious health issues in human populations in recent times," said S C Lakhotia from Banaras Hindu University, who is not a part of this study.