Scientists believe that hydrothermal circulation within its ocean, possibly driven by hydrothermal vents might naturally enrich the ocean in sodium chloride 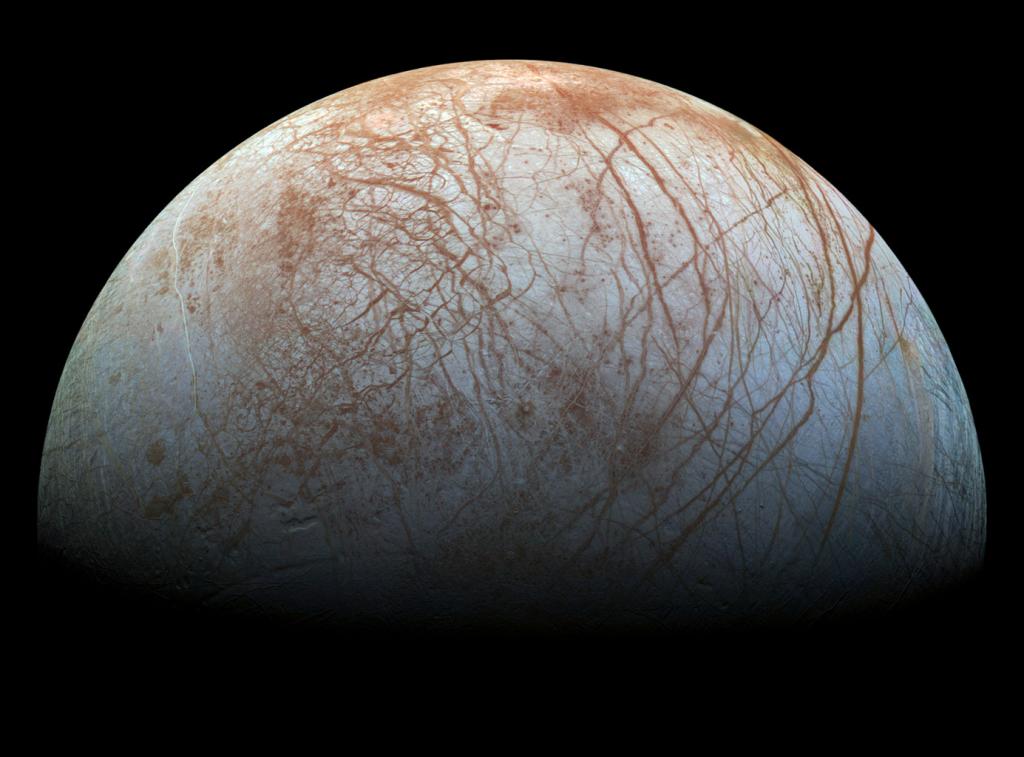 Europa, a frozen moon around Jupiter, is believed to be one of the most habitable worlds in the solar system. It was first imaged in detail by the Voyager 1 probe in 1979, revealing a surface almost devoid of large craters. This suggested that water regularly floods up from inside, resurfacing the satellite. Europa is also criss-crossed with long troughs, folds and ridges, potentially made of icebergs floating around in melt-water or slush.

But it was in the late 1990s that Europa got really interesting. The Galileo mission found evidence that it had a sub-surface liquid salt water ocean. The fact that it is salty gives us clues that the water may be in contact with rock – a process that could provide energy in the water to feed microbial life.

But the observations were too few and limited for us to separately tell how deep and how salty the ocean is – let alone what kind of salts there are. Now a new study, published in Science Advances, shows it may well be normal table salt (sodium chloride) – just like on Earth. This has important implications for the potential existence of life in Europa’s hidden depths.

Scientists believe that hydrothermal circulation within the ocean, possibly driven by hydrothermal vents might naturally enrich the ocean in sodium chloride, via chemical reactions between the ocean and rock. On Earth, hydrothermal vents are thought to be a source of life, such as bacteria. Plumes emanating from the south pole of Saturn’s moon Enceladus, which has a similar ocean, have been found to contain sodium chloride, making both Europa and Enceladus even more enticing targets for exploration.

If we look at the spectrum (the breakdown of light according to wavelength) of light reflected from the surface, we can infer what substances are there. This shows evidence of water ice. But there are also two other materials: “hydrated” sulphuric acid and sulphate salt. Where do they come from? For scientists studying the interior of Europa, or those examining the astrobiological potential of the moon’s ocean, the really interesting question is: do they come from inside Europa?

Like our moon and Earth, Europa is tidally locked to Jupiter, meaning that it always presents the same side to the giant planet. Galileo observations revealed the presence of “hydrated” sulphuric acid on the side of Europa that faces backwards along its orbit, the trailing hemisphere. To make sulphuric acid in water ice you need a source of sulphur, and energy to drive the chemical reaction. Some of this may come up from inside the moon in the form of sulphate salts, some of it can be delivered by meteorites, but the most likely explanation is that it comes from its sibling volcanic moon, Io.

Sulphur would be ejected into space from volcanoes on Io and eventually make its way to Europa. Moving faster than Europa, the sulphur would most likely hit the trailing side of Europa and implant itself in the ice. The energy required for it to do this would come from electrons in Jupiter’s radiation belts. For the most part, they go around Jupiter faster than Europa, hit its trailing side and deliver tonnes of energy.

Measurements have also shown evidence for sulphate salts, such as magnesium sulphate (Epsom salts) but it has remained unclear where it comes from.

The team behind the new study reasoned that the side of Europa facing along its orbit, the leading hemisphere, which is shielded from the sulphur bombardment, might be the best place to look for evidence of what salts actually exist inside Europa.

In the visible part of a spectrum there are distinct features called “colour centres” that appear when irradiated by very energetic electrons. The researchers used the powerful Hubble Space Telescope to look for evidence of these colour centres in Europa’s spectrum and discovered a feature located exclusively on the side of the moon facing along its orbit, showing evidence for sodium chloride.

Although there were some hints of salts in the Galileo observations, the newer Hubble data has allowed the scientists to narrow it down to a region on the leading hemisphere called the chaos terrain, and not in regions where the sulphur chemistry could be driven by radiation. That means they really are likely to come from Europa’s interior.

Life, as we know it, needs liquid water and energy. That Europa has a liquid ocean at all tells us that there is liquid water and a source of energy to stop it from freezing. But the chemical make-up of the ocean is also crucial. Brine, “salty water”, has a lower freezing point than pure water, meaning it makes the water more habitable.

Salt, specifically the sodium ions in table salt, is also crucial for a whole range of metabolic processes in plant and animal life. By contrast some other salts, such as sulphates, might inhibit life if present in large quantities. The researchers were keen to point out that they might just be seeing the end-point of a complicated chain of sub-surface processes – the salt might just be part of the natural ice layers. But, for those hoping there is life on Europa, the discovery of sodium chloride is good news.