My robot Valentine: could you fall in love with a robot?

Imagine if your Valentine's Day date was not human, but a machine. Could there ever be a romantic bond between a human and a robot? 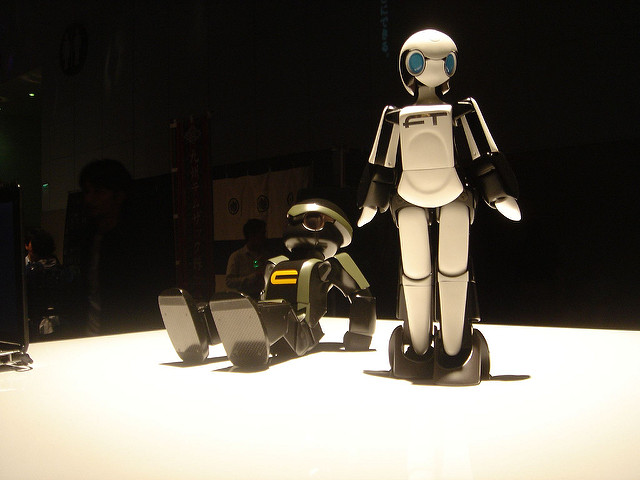 Imagine it’s Valentine’s Day and you’re sitting in a restaurant across the table from your significant other, about to start a romantic dinner.

As you gaze into each other’s eyes, you wonder how it can possibly be true that as well as not eating, your sweetheart does not – cannot – love you. Impossible, you think, as you squeeze its synthetic hand.

Could this be the future of Valentine’s Day for some? Recent opinion indicates that yes, we might just fall in love with our robot companions one day.

Already, robots are entering our homes at increasing rates with many households now owning a robot vacuum cleaner.

Robotic toys are becoming more affordable and are interacting with our children. Some robots are even helping rehabilitate special needs children or teach refugee children the language of their new home.

Will these appliances and toys continue to develop into something more sophisticated and more human-like, to the point where we might start to see them as possible romantic partners?

While some may compare this to objectophilia (falling in love with objects), we must ask whether this can truly be the case when the object is a robot that appears and acts like a human.

It is already the norm to love and welcome our pets as family members. This shows us that some varieties of love needn’t be a purely human, nor even a sexual phenomenon. There is even evidence that some pets such as dogs experience very similar emotions to humans, including grief when their owner dies.

Surveys in Japan over the past few years have shown a decline in young people either in a relationship or even wanting to enter a relationship. In 2015, for instance, it was reported that 74 per cent of Japanese in their 20s were not in a relationship, and 40% of this age group were not looking for one. Academics in Japan are considering that young people are turning to digital substitutes for relationships, for example falling in love with Anime and Manga characters.

If we are to develop robots that can mirror our feelings and express their digital love for us, we will first need to define love.

Pointing to a set of common markers that define love is difficult, whether it be human-to-human or human-to-technology. The answer to “what is love?” is something that humans have been seeking for centuries, but a start suggests it is related to strong attachment, kindness and common understanding.

We already have the immensely popular Pepper, a robot designed to read and respond to emotions and described as a “social companion for humans”.

How close are we to feeling for a robot what we might feel for a human? Recent studies show that we feel a similar amount of empathy for robot pain as we do human pain.

We also prefer our robots to be relatable by showing their “imperfect” side through boredom or over-excitement.

According to researchers in the US, when we anthropomorphise something – that is, see it as having human characteristics – we start to think of it as worthy of moral care and consideration. We also see it as more responsible for its actions – a freethinking and feeling entity.

Robots are already being programmed to learn our patterns and preferences, hence making them more agreeable to us. So perhaps it will not be long before we are gazing into the eyes of a robot Valentine.

Human-robot relationships could be challenging for society to accept, and there may be repercussions. It would not be the first time in history that people have fallen in love in a way that society at the time deemed “inappropriate”.

The advent of robot Valentines may also have a harmful effect on human relationships. Initially, there is likely to be a heavy stigma attached to robot relationships, perhaps leading to discrimination, or even exclusion from some aspects of society (in some cases, the isolation may even be self-imposed).

Friends and family may react negatively, to say nothing of human husbands or wives who discover their human partner is cheating on them with a robot.

One question that needs to be answered is whether robots should be programmed to have consciousness and real emotions so they can truly love us back?

Experts such as the British theoretical physicist Stephen Hawking have warned against such complete artificial intelligence, noting that robots may evolve autonomously and supersede humanity.

Even if evolution were not an issue, allowing robots to experience pain or emotions raises moral questions for the well-being of robots as well as humans.

So if “real” emotions are out of the question, is it moral to program robots with simulated emotional intelligence? This might have either positive or negative consequences for the mental health of the human partner. Would the simulated social support compensate for knowing that none of the experience was real or requited?

Importantly, digital-love may be the catalyst for the granting of human rights to robots. Such rights would fundamentally alter the world we live in – for better or for worse.

But would any of this really matter to you and your robot Valentine, or would love indeed conquer all?