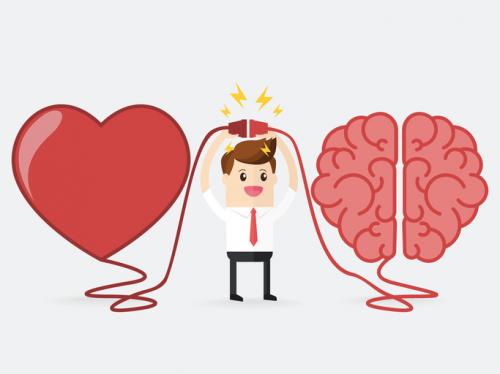 We’ve all felt it at some time in our lives. Poets write about it, singers sing about it – and a whole industry has grown up around finding it, expressing it and maintaining it. But what is love? Where does it reside? What triggers it? And what’s really going on in our minds and bodies when we fall “head over heels”?

Romantic love, though often difficult to define, includes the development of a strong emotional bond – known as “attachment” – sexual attraction and care giving. Those “in love” experience a range of intense feelings, such as intrusive thoughts, emotional dependency and increased energy – though these feelings may be limited to the early phases of the relationship.

Either way, romantic love appears to be universal. But the extent to which romantic love is expressed or forms an important part of sexual relationships may vary. For example, less than 5% of Americans report that they would marry without romantic love compared to 50% of those in Pakistan.

Numerous brain regions, particularly those associated with reward and motivation, are activated by the thought or presence of a romantic partner. These include the hippocampus, hypothalamus, and anterior cingulated cortex. Activation of these areas may serve to inhibit defensive behaviour, reduce anxiety and increase trust in the romantic partner. In addition, areas such as the amygdala and frontal cortex are deactivated in response to romantic love; a process which may function to reduce the likelihood of negative emotions or judgement of the partner.

For example, happiness, commitment to the partner and relationship satisfaction are each related to the intensity of brain activation.

Concentrations of both oxytocin and vasopressin increase during the intense stages of romantic love. These hormones act on numerous systems within the brain and receptors are present in a number of brain areas associated with romantic love. In particular, oxytocin and vasporessin interact with the dopaminergic reward system and can stimulate dopamine release by the hypothalamus.

The dopaminergic pathways activated during romantic love create a rewarding pleasurable feeling. The pathways are also associated with addictive behaviour, consistent with the obsessive behaviour and emotional dependency often observed in the initial stages of romantic love.

Researchers have often investigated the influence of oxytocin and vasopressin in non-human animals such as the prairie and montane voles. It is clearly documented that prairie voles (which form monogamous lifetime relationships known as pair-bonds) have much higher densities of oxytocin and vasopressin receptors than the promiscuous montane voles, particularly in the dopamine reward system.

Furthermore, prairie voles become promiscuous when the release of oxytocin and vasopressin is blocked. Together, these findings highlight the manner in which hormone activity may facilitate (or hinder) the formation of a close relationship.

Romantic love may serve an important evolutionary function, for example by increasing the level of parental support available to subsequent children. We typically enter a series of romantic relationships, however, in our search for “the one” – and the loss of romantic love is widespread, either through the break-up of a relationship or bereavement. While distressing, most people are able to cope and move on from this loss.

For a minority of people experiencing loss through bereavement, complicated grief develops, characterised by recurrent painful emotions and preoccupation with the deceased partner. All bereaved partners experience pain in response to loss-related stimuli (such as a card or photograph). It is argued that for those experiencing complicated grief, the stimuli also activates reward centres in the brain, producing a form of craving or addiction which reduces their ability to recover from the loss.

Furthermore, increased and decreased concentrations of oxytocin promote and reduce maternal behaviour respectively. Differences between responses to maternal and romantic love do occur however as maternal love activates a number of regions (such as the periaqueductal grey matter) that are not activated during romantic love, highlighting the unique nature of the maternal bond.

Few things feel as effortless as the early stages of “true love” or the love felt by a mother for her child, but the reality is rather more complex, a pantomime of hormones and complex physiological interactions that make it a little wonder of the world.