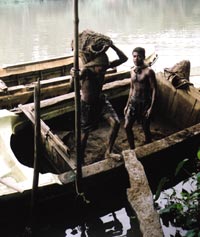 environmentalists in Sri Lanka are up in arms against mining of sand dunes in Puttalam, the coastal town in the country's northwest. At stake are the fragile water table, vegetation, freshwater sources and people's safety from harsh winds, they say. Their appeal for stopping sea sand mining comes amid a clamour of demands from the construction industry for lifting restrictions on sand mining in riverbeds.

The government imposed these restrictions last year and the Supreme Court banned mechanised sand mining in rivers earlier this year. These led to a 700 per cent rise in the cost of sand. Aiming to use sand deposits on the west coast as an alternative, the government allowed permit holders for river sand mining to remove this sand. But the Centre for Environmental Justice (cej), a non-governmental organisation, has requested Sri Lanka's environment and natural resources minister, A H M Fowzie, to stop mining in the sand dunes of Kalpitiya peninsula and the sea belt from Udappuwa to Palavi, both in Puttalam district, according to cej executive director, Hemantha Withanage.

Withanage warns if this is not done, the consequences could be dangerous. Tampering with the region's ecosystem by mining sand dunes would remove the natural wind barriers. The cej has also pointed out that most locations from where sand is mined are adjacent to agricultural lands and this would harm vegetation. It could also cause seepage of saline water into freshwater, harming the region's fragile water table, and expose people to harsh winds.