did the World Seed Congress-2003 -- held under a cloak of secrecy in Bangalore from June 7 to 11 -- have a hidden agenda? It transpires that the conference digressed from the stated objective of pump-priming the Indian seed industry and, instead, ended up sensitising domestic companies about genetically modified seeds 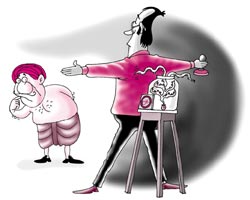 did the World Seed Congress-2003 -- held under a cloak of secrecy in Bangalore from June 7 to 11 -- have a hidden agenda? It transpires that the conference digressed from the stated objective of pump-priming the Indian seed industry and, instead, ended up sensitising domestic companies about genetically modified (gm) seeds.

The congress was organised by the International Seed Federation (isf) in collaboration with the Seed Association of India and Association of Seed Industries. Hosted for the first time by an Asian country, it had about 500 participants from 70 countries deliberating behind closed doors.

What raised eyebrows was the blatant manner in which non-traders were shut out of the meet. The fact that key sponsors of the event -- such as us-based Monsanto Corporation and Syngenta, and Namdhari Seeds Private Limited and Indo-American Hybrid Seeds of Bangalore -- are known to promote gm and hybrid seed varieties, further fuelled suspicions. Despite the fact that farmers produce 90 per cent of seeds in India, no farmers' body was invited to the congress. Even anti-gm groups, opposed to Bt (Bacillus thuringiensis) cotton cultivation in Andhra Pradesh (ap), failed to gain access to the meet. isf general secretary Bernard Le Buanec struck an aggressive note: "Farmers the world over favour transgenic seeds. Anti-gm activists are responsible for stoking the entire controversy."

Expectedly, the Union government played an active role in the proceedings. "The isf was in constant touch with the Union ministry of agriculture," reveals a senior official. Union agriculture minister Rajnath Singh inaugurated the congress. He invited multinational companies to invest and develop new seed varieties in India. Singh admitted that the Indian seed industry was a small player in the global market (while the turnover of the global seed industry is us $30 billion, that of Indian companies is just us $1 billion). But analysts say that the domestic industry has the potential to triple its returns in a short period.

The private sector trades in nearly 60 per cent of the seeds. Indian Seed Federation member Deepak Mullick reels off figures from a 1999-2000 World Bank study. According to it, the traded seed market in India is worth Rs 1,500 crore and is expected to grow up to Rs 4,500 crore by 2010.
Just as the 'secret conclave' was ending, a development that underscored the need for maintaining transparency in such complex matters took place in ap's capital Hyderabad.

Two scientists revealed the findings of their season-long impact study on Bt cotton cultivation in Warangal district. The research, the first of its kind in India, contested several claims made by the manufacturers. It may be noted that Bt seeds are sold in the country under the brand name Bollgard by Mumbai-based Mahyco Monsanto Biotech (India) Limited. The study is titled 'Did Bt Cotton Save Farmers in Warangal?'. The Andhra Pradesh Coalition in Defence of Diversity (apcd), a network of over 140 civil society groups, and Medak-based non-governmental organisation (ngo) Deccan Development Society commissioned the study. They assigned the task to Abdul Qayum, former joint director in ap's agriculture department, and Kiran Sakkari, an agricultural scientist. As many as 450 farmers out of 1,500 who used Bt cotton seeds were assessed.

The research also found that farmers were mixing transgenic seeds with non-gm varieties, since Bt cotton fetches lower prices. "In terms of genetic pollution and contamination, the government's regulatory mechanism has never been functional," feels P V Satheesh, convenor of apcd. "(These results) contradict Mahyco Monsanto's (assertions) that farmers gained by growing Bt cotton in 2002. It is obvious that the industry is making false claims," states the report (see box on previous page: Sizing up Bt cotton).

However, Ranjana Smetacek, director, public affairs, of Mahyco Monsanto counters the charges by citing figures from the company's own survey. The survey was carried out after the harvest of 2002. Farmers who planted Bollgard in 52 districts of six cotton growing states of central and south India were assessed in the survey. "Nearly 55,000 cotton farmers, who harvested Bollgard, reported a 65-70 per cent reduction in pesticide use and a rise in income to the tune of Rs 7,000 per acre (0.4 hectare). They also reported an increase in yield by over 30 per cent," claims Smetacek.


Despite the raging debate on gm seeds, ap is set to promote biotechnology in a big way. The Andhra Pradesh Industrial Development Corporation Venture Capital Limited (apidc-vcl) -- a public-private joint enterprise -- has launched the Biotechnology Venture Fund, which aims to mobilise Rs 150 crore. The apidc and Ventureast (a venture capital fund floated by non-resident Indians) are behind the effort.

"The fund will invest primarily in opportunities that will arise as a result of significant biotechnology and life sciences-related developments," said S M Balasubramanyam, chairperson, apidc-vcl. While inaugurating the venture, K Vidyadher Rao, the state minister for major industries, said: "I am convinced that the country needs biotechnology, whether it is brought by Monsanto or anybody else."

The conflicting assertions made by the pro and anti- gm groups indicate that a clear picture is yet to emerge on the subject. The farmers' bodies, which were strangely excluded from the World Seed Congress, should henceforth have a say in decision-making. For this, the authorities would need to shun the hush-hush approach that vitiated the atmosphere during the Bangalore meet.