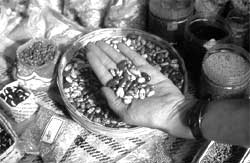 the much-awaited Protection of Plant Varieties and Farmers' Rights Bill 1999 was recently passed by the Lok Sabha. The bill, which is the first attempt to protect the rights of farmers, has been termed as 'far from perfect' by experts, who have questioned its viability. The bill is awaiting Rajya Sabha's clearance. It is a result of the government's commitment to the Trade Related Intellectual Property Rights (trips) agreement, signed under the World Trade Organisation (wto) regime. As per the provisions of the trips agreement, the signatories are allowed to protect their seed varieties by either taking out patents on them, creating a sui generis system (a unique set of laws) or through a combination of both.

The bill recognises the farmers as breeders, cultivators and conservers of the seeds in their possession. It provides them the right to register a variety that they have evolved over a period of time. The bill also gives the farmers the legal sanction to sell their seeds, which was not in place before. But a farmer shall not be entitled to such rights in cases where the sale is for the purpose of reproduction under a commercial marketing system. Moreover, farmers can get their evolved varieties registered only if they are able to 'conform to the criteria of novelty, distinctiveness, uniformity and stability.'

As per the bill, farmers can sell only those patented seeds that are not branded under their name. A lawsuit can be filed against any farmer who is found guilty of selling patented seeds or acquiring a 'brand name' similar to the company's patent name. Farmers could be prosecuted in these cases, unless they prove that these were 'acts of innocence'. The bill also grants scientific researchers the right to conduct experiments with a branded variety in order to create new ones. One of the main provisions of the bill is the establishment of a National Gene Fund, which would facilitate 'benefit sharing' between the farmers and anybody interested in their knowledge. The bill also calls for setting up of the Protection of Plant Varieties and Farmers' Rights Authority. Special mention has been made in the bill about essentially derived varieties (edv) of seeds. The bill categorises edv seeds as "derived from the initial variety but clearly distinguishable from it". Permission for using edv would be granted by the authority.

Suman Sahai of Gene Campaign, a Delhi-based non-governmental organisation (ngo), says the bill is a positive step. "The bill would help in giving recognition to those farmers who have preserved traditional knowledge," said M S Swaminathan, chairperson of the Chennai-based M S Swaminathan Research Foundation (see p48). S K Sinha, senior scientist at the New Delhi-based Indian Agricultural Research Institute, agrees with him. He says, "The bill would help farmers who have developed a unique tradition of selecting seeds over hundreds of years."

However, other experts opine that the bill leaves much to be desired. They allege that it replicates a legislation of the Union for the Protection of New Varieties of Plants (upov), whose members consist of industrialised nations. " upov is a charter for multinational companies and it is anti-farmer," says Rajeev Dhavan, director of the Public Interest Legal Support and Research Centre, a Delhi-based ngo . "It is unfortunate that the government did not prepare itself well for the wto regime," rues Sinha. "Though said to be a farmers' rights bill, its procedures are cumbersome," alleges Ashish Kothari, founder member of Kalpavriksh, a Pune-based ngo.

But despite these views and the bill being along the lines of upov, most experts say that it is a good beginning for recognising the rights of the farmers. It should be effectively implemented for its worthiness to be judged in the future.