As the world rushes for the gas, scientists gather evidence of its environmental risks 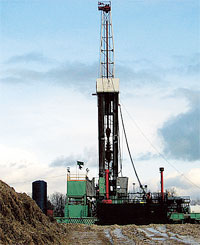 WITH dwindling natural gas and oil reserves, the world is increasingly looking for alternative sources of energy. Industry people say shale gas is one promising option. It is the natural gas trapped in shale, a type of flaky sedimentary rock. It already accounts for 22 per cent of USA’s gas supply. By the US energy information administration’s reckoning, shale gas will meet 14 per cent of the world’s gas needs by 2030.

Environmentalists are sceptic of this option, primarily because of its controversial extraction process. Called hydraulic fracturing or fracking, the process involves injecting a mix of water, sand and chemicals deep underground at ferocious pressure. This breaks up shale formations, releasing the gas trapped so it can be pumped to the surface. The technology so far remains almost unregulated as there was no evidence to show its environmental impact. A recent study by geologists at Duke University in the US found that groundwater near shale extraction sites in the country is contaminated with methane.

They collected water samples from 68 wells in five counties in Pennsylvania and New York. The region overlies the Marcellus and Utica shale formation, the largest known gas reserve in the US. Residents have been complaining of well water contamination since drilling started in 2005. Though there has been little research on the health effects of methane in drinking water, the inflammable gas can cause respiratory problems like asphyxia. There are reports of houses near extraction sites being blown up due to methane leak in the basement.

Tests revealed water in wells within one kilometre of the extraction sites had 17 times more methane than those farther off. The samples contained 19.2-64 mg of methane per litre. This is a potential explosion hazard, the scientists noted in the Proceedings of the National Academy of Sciences on May 9.

The team led by Robert Jackson also used carbon and hydrogen isotope tracers to distinguish between thermogenic methane, formed at high temperatures deep underground and captured in gas wells during fracking, and biogenic methane, produced naturally at shallower depths and lower temperatures. Analysis showed water in wells within a kilometre of extraction sites contained the methane released during shale gas extraction. “We do not know the mechanism for methane contamination. It could have leaked through the well casing,” says Avner Venghosh, co-author of the study. The paper mentions that the contamination could also be due to new fractures formed during fracking.


The study’s publication coincides with the French government’s decision to ban fracking for the exploration and production of shale gas and oil in the country. Opponents of the technique say shale gas is not as clean as the industry claims. In a study paper published in Climate Change Letters in April, Robert Howarth from Cornell University in the US says shale gas has a greater carbon footprint than fossil fuels over a long period (see ‘Gas with heavy footprint’). Besides, fracking requires a lot of water and uses toxic chemicals. Though oil and gas companies are often reluctant to disclose the chemicals they use, critics say over 750 chemicals are used in the process. Pennsylvania’s environmental protection department recently released a list of chemicals used in fracking at the Marcellus shale wells. One of the chemicals, xylene, is neurotoxic and can damage liver. Another chemical, methanol, causes cancer.

The Duke scientists, though, say they did not find evidence of pollution from the chemicals.

Partha Chakraborty, professor of geology, University of Delhi, remains sceptical of their conclusion. If the extraction procedure is faulty, it is likely that the chemicals would remain trapped in the strata, he says. These chemicals can flow into the surrounding environment in events of well spills and accidents. Oil companies claim they handle the chemicals safely.

The state-owned Oil and Natural Gas Corporation (ONGC)Ã”Ã‡Ãªin January announced the discovery of India’s first shale gas reserve in Durgapur in West Bengal. Cambay, Krishna Godavari and Kaveri basins also have potential shale reserves, it says. The government plans to auction these blocks for exploration by the end of the year. Though it might be long before the reserves can be exploited commercially, it provides an alternative to a country which shells out a fortune to import natural gas. According to the Petroleum Planning and Analysis Cell, India’s crude oil imports were worth US $7.15 billion in December 2010—a month-on-month rise of 17 per cent.

Energy experts like Bhamy Shenoy from Mysore, former board member of Georgian National Oil Company, say shale gas is a promising option for India given its scarce energy resources.

A report by non-profit Prayas Energy Group in December last year warns that all potential shale gas sites in the country are water scarce. It cites western Rajasthan as one such area. The non-profit recently wrote a letter to the Ministry of Petroleum and Natural Gas, urging the government to undertake research to explore the link between fracking, groundwater resources and land subsidence before auctioning the the shale blocks.