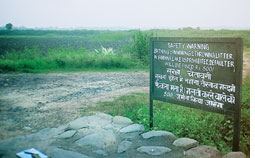 Sukhna lake in Chandigarh is steadily shrinking. Siltation and commercialization of the surrounding area are taking their toll on the lake. "Sukhna has become a pond and the administration is just sitting over it," says M N Sharma, former secretary, Chandigarh administration.

Sukhna is a rainfed lake, which was built by damming the Sukhna Choe, a seasonal stream flowing down the Shivalik, in 1958. It was initially spread over 230 hectares (ha) but has now been reduced to around 154 ha. "The reduced area is a result of siltation. Over a period of time, the silted part was converted into what is now called the Sukhna Lake Reserve Forest," says Ishwar Singh, deputy conservator of forests, Chandigarh. He says the water level has come down from around 5m in 1958 to around 2m in 2004.

Between 1958 and 1962, nearly 20 per cent of the lake got silted since a lot of soil erosion took place from the agricultural land in the 4,200-ha catchment area (see box Lesson not learnt). The administration then acquired 3,400 ha in the catchment to prevent erosion. In 1988, 2,600 ha was converted into the Sukhna Wildlife Sanctuary. 800 ha of the acquired catchment was taken up by the reserve forest. The remaining 800 ha is agricultural land.

Official records say 186 tanks have been built in the Sukhna Wildlife Sanctuary which "have successfully retained the silt in the region". The administration claims erosion had come down to 560 kg per ha per year in 2004 (from 1,600 kg per ha per year in 1988). The problem, however, persists. "The lake dries to a large extent in April-June. It is dredged out during the period," says Singh. The administration has approved a Rs 73-crore plan for desilting, scheduled to begin next year. The plan is to remove around 2.5 m of silt over a period of six years. The silt will be used to fill low-lying areas in the southern part of Chandigarh.

Despite the desiltation plan, town planners feel the measures are not enough. "More constructive work needs to be done in the catchment. If each and every patch of land is used there, the lake will receive clear water," says H S Johl, a horticulturist.
Then there is the construction problem. The 'Edicts of Chandigarh' prepared by the city's architect Le Corbusier, reads "There shall be no commercial exploitation of the lake and its environment and its tranquillity shall be guaranteed by banning noises." The area around the lake now houses food kiosks, shops, motor boats, floodlights, telecom towers, a watch tower and a musical fountain in and around its vicinity. The lake was a haven for migratory birds from Siberia but these developments have affected their numbers, says a planner.

Despite a supreme court ban on constructions near the Sukhna Lake, rules continue to be flouted. Chandigarh has allowed constructions in the southern part of the lake, which according to the master plan is supposed to be a 'green belt' and 'no-construction zone'. The Rajiv Gandhi Chandigarh Technology Park will come up in the area and a large portion of land has been given to Parsvnath group for a residential complex, 200 m away from the lake.

Vivek Atray, director, tourism and public relations, Chandigarh administration, told Down To Earth that the builders had been "ordered" to plant trees till about 200 m from the boundary wall. But Atray did not comment on how the saplings could replace the 30-40 year old mango orchards that were cut down for the project.

Social groups allege that clearances for the projects were "facilitated" but the administration rubbishes the allegations.According to Singh, the constructions are a "trivial issue", which "do not affect the serenity of the lake at all".