Sindhudurg on road to conflict 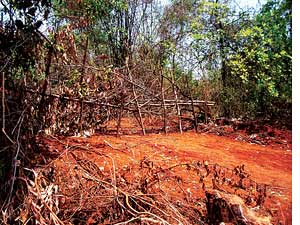 Anti-mining stir leads to a row, death and persecution

ON THE morning of March 19, people of Kalane village in Sindhudurg district of Maharashtra were roused by the sound of heavy machinery. Workers hired by mining company Minerals and Metals were building a road at 4 am leading up to the mine in Survey Number 57. "They were illegally cutting through the land owned by villagers," said Rakesh Chonkar, an eyewitness from the village in Dodamarg taluka.

People rushed to stop the work and got into an argument with the company officials and 50-odd security guards. "After the police came the officials and guards jumped into vehicles and fled. One guard fell off a jeep and hurt himself," Parag Gaonkar, a journalist and resident of Kalane, told Down To Earth. "Later, he died of internal injuries."

The police booked 20 top leaders of the anti-mining agitation in the region. Parag said he had clicked photographs, including that of the guard falling, but the police refused to look at the pictures.

R V Pilnekar, the station house officer in Dodamarg, said the police had enough evidence against the booked.

The scenic Kalane has been on edge ever since the Indian Bureau of Mines cleared an open-cast mining project there on January 22. Despite people's opposition the mining lease over 32.25 hectares (ha) was granted to Minerals and Metals, promoted by Doddanavar Bros, one of the principal producers of iron ore in India. The company plans to extract an estimated 5.4 million tonnes of iron and manganese ore underneath the leased patch of the Sahyadri range, one of the world's 25 richest and threatened biodiversity hot spots.

Most of the 1,500 people in Kalane, as in other parts of the Konkan region, depend on horticulture and cashew plantations. They fear silt and dust from mining will affect their health and plantations. The rapid environment impact assessment (eia) report of the project warns that fine dust particles released during mining will affect breathing and may result in silicosis and tuberculosis. Noise from mining may hinder hearing and affect people's nervous system.

People of Kalane allege the police want to break the movement's back. "For a week after the clash, personnel in riot gear from the Dodamarg police station kept entering our houses and threatened to implicate us in the murder case," said Harishchandra Bhise of Kalane. The men in Kalane went underground for days until the visits stopped. In the last week of March, Kalane residents went to the police station wearing black bands and dared the police to arrest them. The police registered a case of rioting against 47.

Patil said the people were pushed to the brink by the administration. The first public hearing of the project in August last year was a farce, where the administration let the mining officials interrupt people when they spoke, she alleged. Chonkar said during subsequent hearings the villagers were "heckled by ruffians" flanking the gathering.

Also, the eia report is full of errors. Prepared by a mining engineer registered with the Indian Bureau of Mines, it lists jackals as the highest predator in the Sindhudurg jungles, while the district's official portal acknowledges the presence of leopards and tigers. The report says mining will not have much impact on wildlife, even though Kalane is part of an elephant migratory corridor (see 'Elephants without borders', Down To Earth, February 16-28, 2009).

With Goa extensively mined, attention is shifting to neighbouring Maharashtra. In January, Maharashtra withdrew the ecologically fragile status given to Sindhudurg in 1997 and allowed mining and thermal power plants in the district full of pristine beaches and calm backwaters (see 'Volte face', Down To Earth, March 1-15, 2009). People in Kalane prefer tourism to mining.