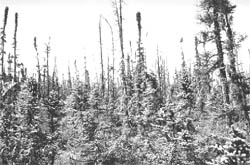 while huge concessions have been given to the umbrella group countries under the Kyoto protocol for using forests as carbon sinks to meet their targets, latest research shows that planting forests to curb global warming could backfire. Planting trees across the snow-covered swathes of Siberia and North America will heat the planet rather than cool it, shows recent research conducted by the uk meteorological department. Richard Betts of uk ' s meteorological office says that the theory of forest acting as sinks does not take into account other ways by which new forests can affect climate. "Carbon accounting alone will overestimate the contribution of afforestation towards reducing climate warming," he says.

Betts presented the first detailed calculations showing that planting trees across Siberia and North America will heat the planet rather than cool it.And even away from the tundra, the cooling potential of forests is much less than previously believed, he told a climate conference in Amsterdam.

Green forest canopies reflect much less solar radiation than most other land surfaces. They also absorb more, heating the Earth's surface. This effect is greatest where forests replace snowy tundra, which normally reflects large amounts of solar radiation. According to Betts calculations, at northern latitudes warming as a result of planting forests will overwhelm any cooling effect due to the trees soaking up carbon dioxide. Both Canada and Russia want to plant forests in their empty tundras to help meet their Kyoto commitments, because a hectare of immature forest can absorb more than 100 tonnes of carbon each year, despite growing slowly. But Betts calculates that the net warming effect of heat-absorbent forests in both regions is equivalent to an annual emission of 75 tonnes of carbon per hectare. His new calculations also halves estimates for the carbon sink potential of western European forests. "Even in places where the cooling effect is still dominant, the influence is generally much smaller than expected when considering carbon sequestration alone," says Betts.