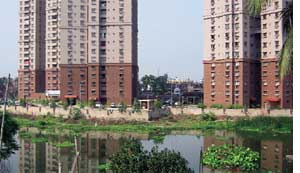 The promoters of South City, Kolkata’s tallest housing complex comprising four 35-storey towers, have sought clearance for a fifth tower. This triggered a fresh round of protests; residents and activists said the towers flout environmental norms.

Member secretary of the West Bengal State Pollution Control Board (SPCB), confirmed receipt of application from the developers last month and said it is under process.

A part of the complex has been built by filling up 11,000 sq metre of the Bikramgarh lake measuring eight hectares (ha).


Different government departments have indicted the developers, a consortium of builders including Emami and J B groups, for bypassing environmental rules. Yet officials looked the other way as the towers rose.

The lake is a place of interest for schoolchildren studying biodiversity. “It is one of the largest waterbodies in south Kolkata; encroaching it will jeopardize the environment and the drainage system,” said Mohit Roy of non-profit, Basundhara Foundation.

The non-profit was among the first to complain against the project that set a series of enquiries rolling (see box).

“The scandal is unique as different government agencies corroborated violation of rules; R Mohan, then additional solicitor general of India, had pointed out in 2006 that the developers did not take clearance from the Centre as mandated under the Environmental Impact Assessment notification of 1994,” a senior SPCB official said.

But no action was taken though two chief engineers and two secretary level officials were indicted by a committee headed by present SPCB chairman, P N Roy.

A South City Projects (Kolkata) Limited spokesperson said the government reports were redundant as the high court had cleared the project in December 2007. But lawyer-activist Subhas Dutta said the court did not look into the environmental aspect. It only dealt with the petitioner’s locus standi and in no way stopped the authorities from taking action. Allowing the developers to get away will set a bad precedent, Dutta added.

South City has encouraged others to raise illegal garages and huts, residents said. Roy said the construction on the lake is worth Rs 200 crore (the total project cost is about Rs 1,000 crore) which should be charged as pollution cost from the developer and used for lake restoration. The government has decided to fence the lake after minister of public works, Khiti Goswami and Mayor in Council (Environment), Sushil Sharma, visited the area.