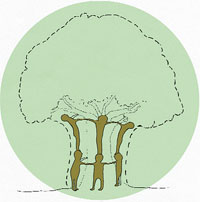 INDIA’S first pilot project to be recognised under the UN’s mechanism for reducing emissions from deforestation and degradation (REDD) could be in the East Khasi Hills in Meghalaya.

A watershed project, started jointly by a California-based non-profit and a tribal community in 2005 in the northeastern state aims at checking deforestation and has shown potential as the country’s maiden REDD pilot. REDD is a mechanism for encouraging developing nations to preserve their forests by giving an economic value to the carbon saved by stopping deforestation.

For the past six years Community Forestry International (CFI) has been working with the Mawphlang tribal community to preserve a sacred grove. Rich in biodiversity, the grove covers about 75 hectares in the Umiam basin’s watershed area. Umiam Lake is a reservoir in the hills 15 km from Shillong.

At present, the tribal community is looking for funding from agencies like the World Bank’s Forest Carbon Partnership Facility to make the watershed project a REDD pilot.

“These kind of pilot projects help understand the role communities play in influencing carbon stocks at the grassroots level,” says Jagdish Kishwan, additional director general of forests (wildlife) in the Union Ministry of Environment and Forests. In a meeting organised on April 18 by the World Bank in Delhi, Mark Poffenberg from CFI talked about the challenges and improvements concerning the project.

However, many loopholes exist in REDD. The mechanism restricts itself to protecting carbon stocks in trees, and does not address ecosystem services provided by a forest, like timber, other forest produce and protection of threatened species. These services can be given attention once indicators that check biodiversity are developed. “Till then we need carbon as the indicator to move forward,” Poffenberg said, stressing the need for such projects, however, should not be carbon-centric.

The project in Meghalaya meets several REDD criteria. One criterion is that the community has to show deforestation or degradation of forest before it increased green cover. Between 2001 and 2005—the year the project started— the forest cover in East Khasi Hills decreased by 5.6 per cent.

The Mawphlang tribal community has another reason for a higher chance of participation in the REDD process; it has established ownership rights over forest resources. Funding and access to funds for REDD projects has remained controversial because many developing countries do not have well-recognised rights over forest resources. This makes it particularly difficult for forest-dependent communities to share the benefits generated from a REDD project.

Madhu Sarin, a forest rights activist, is skeptical. She asks, “In projects such as this how much control will communities retain when entering a fundamentally complex mechanism with international stakeholders?” She warns that transferring control over project from communities to international entities is against the principle of local empowerment.