‘States that use less must get less’ 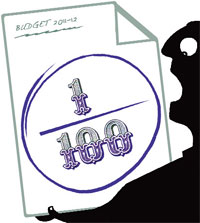 THE 14th report of the parliamentary standing committee on social justice and empowerment has recommended the planning commission make conditional the annual budgetary allocations of funds to states. It should depend, suggests the committee, on the amount spent on tribal development.

Tabled in both Houses of Parliament on March 9, 2011, the report focusses on actions taken by the Ministry of Tribal Affairs (MoTA) on recommendations of an earlier report of the standing committee of social justice. Submitted to MOTA on July 21, 2010, the report, The Fifth Report on Grants 2010-2011, had put forth 23 recommendations. The ministry’s response to these recommendations, notes the 14th report, “has been unsatisfactory”.

The ministry suffered a 46 per cent cut in the tribal sub-plan allocation. The sub-plan is an area-specific approach to development schemes. The finance ministry cut MoTA’s budgetary allocation of Rs 900.50 crore for 2009-10 to Rs 481.24 crore because only Rs 449.66 crore had been used till December 31, 2009.

The ministry blames under-utilisation of funds to non-performance by states, a view shared by Dara Singh, who heads the standing committee on social justice. “Onus of implementing tribal development projects lies with channelising agencies like the state governments which are slow in submitting necessary documents,” he says. “To exert pressure on states for timely submission of proposals,” the 14th report suggests “the matter should be taken up at the planning commission level so that at the time of discussion of annual plans of the states, the commission may take some action against defaulters”.

The Centre has made it mandatory for its 68 ministries and departments to set aside funds for development of Scheduled Castes and Scheduled Tribes. These funds must be under the SC and ST sub-plan. But hardly any ministry or department has done so.

C R Bijoy, environmental lawyer and tribal rights activist, says the ministry and state governments have been equally irresponsible. Rama Devi, committee member and BJP MLA from Bihar, says, “We made suggestions in the Fifth Report, but have seen little response. Tribals across the country are in great need of government assistance.”

In July 2010, the committee recommended the ministry monitor tribal welfare programmes of other ministries and keep information handy “so that it is better equipped while formulating schemes for STs and getting them approved by the Planning Commission”. Its 14th report reiterates a July 2010 recommendation to formulate a coordinating committee with senior ministry officials as its members.

The report has given the ministry three months to set up the committee. It has also recommended better coordination of the ministry with other ministries that implement tribal welfare programmes.