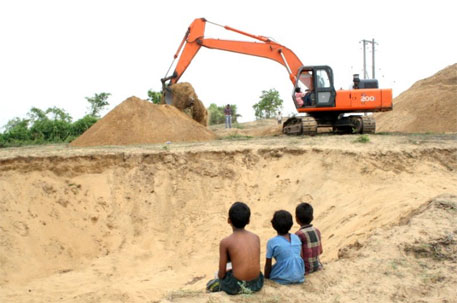 Anti-land acquisition residents in the seaside villages of Dhinkia, Nuagan and Gadakujang in Odisha have been handed a fresh lease by the recent statement issued by Union steel minister Narendra Singh Tomar. The minister had announced that South Korean steel giant POSCO will have to bid for the state’s iron ore reserves for their proposed steel plant in Jagatsinghpur district.

“POSCO’s proposed steel plant has received a serious setback. The company had hoped to get the iron ore mine at Khandadhar for a song from the state government, without participating in any open auction,” said Sishir Kumar Mohapatra, general secretary of Posco Pratirodh Sangram Samiti (PPSS).
According to Mohapatra, POSCO had earlier proposed a 12-million-tonne per annum (mtpa) steel plant. But the steel company later sought at least 1,092 hectares of land to start construction on an eight-mtpa plant.

“Public auction is the sine qua non for allocation of minerals as per the Mines and Minerals (Development and Regulation) Amendment Ordinance, 2015. Tomar has rightly stated that to get the mines, POSCO will have to participate in an open mine auction. Many tribals in Khandadhar are also determined not to allow any company to take iron ore from the region. The minister’s statement will boost their morale,” he added.

The state government, on the other hand, alleged the Centre was trying to impede development by POSCO. Prafulla Kumar Mallick, the steel and mines minister of Odisha, said, "The state government had signed an MoU with POSCO 10 years ago to build a mega steel plant. Allocation of mines was also a condition in the MoU. The mandatory auction route, however, will be an impediment for POSCO in getting iron ore mines in Khandadhar. Tomar is trying to dilute the conditions in the 10-year-old MoU with an ulterior motive. A large number of people will get jobs and other benefits after construction of the steel plant. This is the biggest FDI in the country. But the BJP-led NDA government is trying to prevent POSCO from building a steel plant in the state.”

The MoU was signed on June 22, 2005, to build a steel plant at the cost of Rs 52,000 crore. The proposed steel plant project got a fillip on June 4, 2013, when the district administration completed land acquisition by acquiring 1,092 hectares of land in the three gram panchayats of Dhinkia, Nuagaon and Gadakujang. On January 10 last year, the Union environment and forest ministry also re-validated the environmental clearance to the steel plant project.

When contacted, a senior official of POSCO refused to comment on the statement by the Union steel minister.

Iron and steal: the Posco-India story