Cattle fed with subabul biscuits can produce up to 20 per cent more milk. The fast-growing tree also produces useful timber. 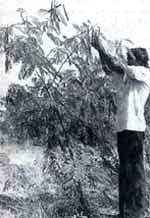 NUTRITIOUS biscuits made from the leaves of the fast-growing fodder tree subabul (Leucaena leucocephala) can be fed to cattle and increase milk yields, say animal husbandry and social forestry experts. Subabul, which originated in central America, is now grown widely as a fodder crop in India.

Subabul biscuit production was initiated on a small scale in a few districts in Tamil Nadu. A factory has been set up in Sengipatti village in Thanjavur district to produce these biscuits. Says P Mariyadas of the Danida livestock development project in Pudukottai, Tamil Nadu, who along with K Ganesan, an agro-forestry expert in Thanjavur, first proposed the subabul biscuit idea, "Production of biscuits reduces transport costs and wastage, and cattle produce higher milk yields."


The subabul biscuit idea is yet to catch on in a big way. Although established feed companies pose stiff competition, some people have already started small-scale commercial production. Says Ganesan, "Though they are cheap and easy to produce, not enough attention has been paid to biscuit production technology and efforts to popularise the technique on a large scale have been tardy."

The subabul tree has other uses, too. Scientists at the Indian Grassland and Fodder Research Institute (IGFRI) at Jhansi say that subabul fodder is very palatable and nutritious, and its wood produces useful timber. Scientists at IGFRI have been working on this species since 1978. They have built an impressive germplasm collection from around the world and are attempting to breed high-yielding fodder and timber varieties.

Fodder quality improves with decreasing seed numbers and IGFRI breeders have developed low-seed producing varieties of subabul. Experts say subabul is an ideal plantation crop that can be used by farmers for agro-forestry. Subabul cultivation would be particularly appropriate for marginal farmers who do not have access to large land holdings for fodder grass cultivation.