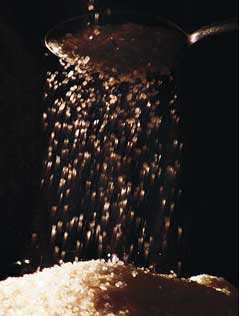 household pests like termites, cockroaches and ants can now be controlled using a sugar-derivative. Pesticides that are usually used to control these insects can harm more living beings--including humans--than they are meant to. The molecule was used on the termite; it reduced the immunity of the insect and made it more vulnerable to infection from natural pathogens.

Simple pathogens like fungus and bacteria are present in abundance in the nest of a termite. The termite resists such pathogens using a special protein that attacks the cell wall of the invading pathogen and kills it.Mark S Bulmer, molecular ecologist from the Northeast University, Boston, and collaborators at Massachusetts Institute of Technology, found that the sugar-derivative--D-delta-gluconolactone (gdl)--blocks the protein and lowers the insect's resilience to infection.

The team fed termites filter paper treated with gdl and exposed them to a fungal pathogen. The termites died within five days which was half the time taken by ones not fed on gdl.

"We are currently engineering micro-capsules to encase the sugar molecule. These capsules can be made of natural materials (like cellulose) that only termites have the enzymes to break down," said Ram Sasisekharan of mit who headed the study. "The microcapsules can be used as green pesticides. They could be mixed in paints or added to home-building materials and renewed as needed to ensure long-term protection from pests," he added.

This is not the first time that natural methods have been used to control termites. "Chitin synthesis inhibitors, which interfere with the metamorphosis of an insect, have been very effective in termite control, and this product has been marketed since the early 1990s," said James Traniello, biologist at the Boston University, Massachusetts.

Further research is needed to test the efficacy of the molecule in fields as it is biodegradable and might not last long enough in the nests. How this molecule will be introduced in the ecosystem is still not known. As the immunity protein is common to all insects the method can be used for other pests like cockroaches but it is time-consuming and expensive, said Traniello. Although the insecticide is environment-friendly and a promising one, there is a possibility of this molecule harming beneficial insects.

The study was published online in the June 8 issue of the Proceedings of the National Academy of Sciences.